UFI welcomes Paul Cornell Author of London Falling. Thanks for Joining us!!


I once got a fan letter from Kate Bush.  Who just happens to be my favourite recording artist!  (I was rather pleased, I can tell you!)


Watching cricket just makes a tense bit of me feel so much better.  (Mental bit of me, I mean.  Cheeky.)


'Having written.'  I bet everyone says that.  I rather like sorting out one of those big character-defining moments that hopefully makes people go 'oh, they would do that, wouldn't they?'


I tend to type, look at Twitter, look at Facebook, type again, in a sort of continual cycle.  I take micro-breaks, which I'm told is a good way to work.  But it wasn't deliberate!


How would you pitch London Falling to someone who has never heard of it before??


It's a novel about what happens when a unit of modern undercover London police accidentally gain the power to see the monsters and the magic.  After they've finished panicking, they decide the only way they're going to survive is to use (real) police methods against the supernatural.  There's loads of cynical copper humour alongside the dark stuff, and I hope it gets quite emotional.  If you like the voice I write Doctor Who in, this is much the same.


What can you tell me about the world that London Falling is set in?


It's got a surface that's hopefully exactly that of the real world, with a lot of detail about police methods and work life (gleaned from several undercover coppers of my acquaintance).  The nature of what's underneath is something that I hope to gradually reveal over several books.  There's going to be a complete case in every volume, but the back story keeps getting bigger.  There's something like magic, that has something to do with the shape of the land and buildings and the human mind, in a psychogeographic way.  But my police don't use the M word, like the word Mafia doesn't appear in The Godfather.


Do you have a favorite scene in London Falling?


I think it's the one where my coppers dismantle the idea of a ghost bus, wondering how a motor vehicle could walk the earth as a restless spirit.  Being police, they use their ops board to boil down supernatural concepts and try to unpick the mechanisms behind them.  They're never content with archetypes.


My genius intelligence analyst, Lisa Ross (not the name she was born with) is someone I feel very close to.  She's had this terrible tragedy in her life, and she's working towards her revenge when it's all taken from her.  It's a challenge to write a really smart detective who operates in ways which the reader (and the author) can still understand when she explains them.


The sequel, The Severed Streets (Jack the Ripper is back and this time he's killing rich white men) is out in the UK later this year.  I'm writing Wolverine every month for Marvel, and there are a couple of TV projects I can't tell you about yet.

Paul Cornell is a British writer of science fiction and fantasy prose, comics and television. He's been Hugo Award-nominated for all three media, and has won the BSFA Award for his short fiction, and the Eagle Award for his comics. He's the writer of Saucer Country for Vertigo, Demon Knights for DC, and has written for the Doctor Who TV series. His new urban fantasy novel is London Falling, out from Tor on December 6th. 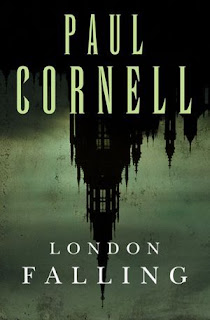 
The dark is rising . . . Detective Inspector James Quill is about to complete the drugs bust of his career. Then his prize suspect Rob Toshack is murdered in custody. Furious, Quill pursues the investigation, co-opting intelligence analyst Lisa Ross and undercover cops Costain and Sefton. But nothing about Toshack’s murder is normal. Toshack had struck a bargain with a vindictive entity, whose occult powers kept Toshack one step ahead of the law – until his luck ran out. Now, the team must find a 'suspect' who can bend space and time and alter memory itself. And they will kill again. As the group starts to see London’s sinister magic for themselves, they have two choices: panic or use their new abilities. Then they must hunt a terrifying supernatural force the only way they know how: using police methods, equipment and tactics. But they must all learn the rules of this new game - and quickly. More than their lives will depend on it.