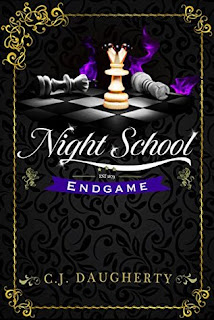 
Broken. Scattered. But not defeated.

The spy is gone but the cost has been high - the rebels at Cimmeria Academy have lost their leader and Carter West is missing. Nathaniel can taste victory. But Allie and the other survivors aren't done yet. First they have to get Carter back. Then they plan to make Nathaniel pay.

One way or another - the game must end.

Endgame is the thrilling fifth and final book in the internationally bestselling Night School series.


RESISTANCE ended on a killer cliffhanger, so jumping into ENDGAME as soon as I received it was a given. I try not to write too much in my reviews of last books in a series because everything seems to be a spoiler so this will be short.

The Night School series has been a fun series to follow. There was lots of action, suspense, and danger. There were interesting characters that continued to grow with each book. A conflict that kept you engaged from the start and plenty of situations that made you want to jump in-between the pages and help Allie, Carter, Sylvain and friends fight the good fight.

ENDGAME had pretty much everything you have come to expect from the series from previous books. The situations were dangerous, the characters were fierce and the ending was bittersweet.

I think ENDGAME ended the series on a nice note. The major storyline was resolved and I felt that it was resolved in a way that made sense and made the good guys come out ahead in the end. I wish we could have gotten a few years down the road epilogue, but that is just something I like to see at the end of a series. If you are looking for a great new young adult series to read, you should run out and pick up this series for yourself.