UFI welcomes Author Paula Altenburg. Thanks for Joining us!!

I’m Paula Altenburg, and I’m so happy to be here today. I write paranormal and fantasy—as well as short contemporary—romance. Pale Moon Walking is my seventh paranormal, (eleventh overall), although it’s more a hybrid mix of historical western, science fiction, and romance. It’s got a female sheriff who’s a retired gunfighter, a US federal marshal who has super powers, there are outlaws, and best of all, aliens. Everyone’s got secrets.

And anyone who knows me knows my heroes are usually based on Hugh Jackman and Daniel Craig. It doesn’t matter how I describe them in the story.

I’ve written paranormal westerns for a while now. My last series with Entangled Publishing, the Demon Outlaws, involved demons taking over the west, creating a dystopian future with a Wild West feel to it. I think it’s fairly safe to say I have a thing for outlaws and cowboys. Add in a few super powers and I’m all over it.

Believe it or not, giving a character super powers is a tricky thing for a writer to do. Protagonists have to be fairly well-balanced with their antagonists, or the story’s either over too soon, or it lacks credibility. In fact, the antagonists should even be a wee bit stronger.

In Pale Moon Walking, I gave the hero, Sam, the ability to create illusions, which doesn’t really sound like much of a super power, so I gave him the home team advantage, too. I also gave him Libby Mayden, who’s killed six men in as many shootouts, and knows how to kill aliens. (I bet you’d love to find out how she discovered that little detail, wouldn’t you?)

Apart, Sam and Libby each have their weaknesses. Together, they’re unstoppable.

Here’s a little secret. If you were to ask me who my favorite superhero is, I’d have to say Hellboy.

Ron Perlman might have a lot to do with that. I love the attitude so, so much.

If you had to choose a favorite superhero, who would it be? 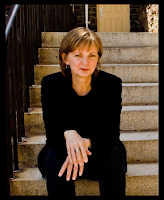 Paula Altenburg lives in rural Nova Scotia, Canada, with her husband and two sons. Once a manager in the aerospace industry, she now enjoys working from home and writing fulltime. Paula writes fantasy and paranormal romance, as well as short contemporary romance. 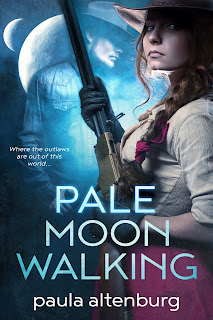 Libby took off like a rabbit as soon as she heard the crack of the bat. She approached first base at full speed, saw no one coming at her, and didn’t slow down. She rounded the base and headed for second.
From the corner of her left eye, she spotted a fast-moving blur. Sam had the ball, and rather than give it up to the second baseman, he was pursuing Libby himself, planning to cut her off before she could reach safety.
She judged the distance between Sam and second base, and the space she had left to run. She never slowed, but instead, dropped onto her right calf and thigh in a long slide, folding her left leg and throwing her hands high as she did. She kept her attention focused on touching the base with her foot. Nothing else mattered. Either he caught her or he didn’t.
She felt her foot connect with Sam’s ankle at the same time he reached second, knocking him off balance as she finished the slide. He threw his arms up, just as she’d hoped. He windmilled in slow motion, unable to regain his footing, and toppled on top of Libby, knocking the air from her lungs with his weight.
He brought his arms down on either side of her face. His chin connected with her forehead and she heard the faint click of his teeth striking together.
He grinned down at her, the gold flecks in his eyes sparkling. He touched the ball to her collarbone, just below her jaw where he knew it was sensitive, and Libby’s toes burst into flames. “You’re out, Sheriff Mayden.”
“In your dreams, Marshal Kyote,” she wheezed back. “If you check, you’ll find my boot’s on second base.”
Sam didn’t budge. “We’ll have to consult the umpire. Oh, wait. That would be you.” His grin widened, and now Libby couldn’t breathe for a whole different reason. “How are you planning to call it from this position?”