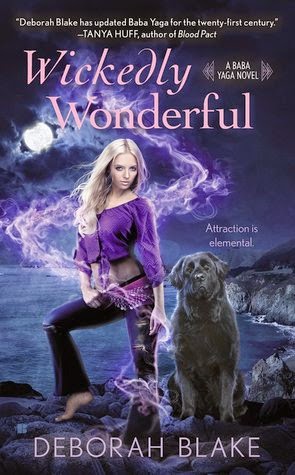 Though she looks like a typical California surfer girl, Beka Yancy is in fact a powerful yet inexperienced witch who’s struggling with her duties as a Baba Yaga. Luckily she has her faithful dragon-turned-dog for moral support, especially when faced with her biggest job yet…

A mysterious toxin is driving the Selkie and Mer from their homes deep in the trenches of Monterey Bay. To investigate, Beka buys her way onto the boat of Marcus Dermott, a battle-scarred former U.S. Marine, and his ailing fisherman father.

While diving for clues, Beka drives Marcus crazy with her flaky New Age ideas and dazzling blue eyes. She thinks he’s rigid and cranky (and way too attractive). Meanwhile, a charming Selkie prince has plans that include Beka. Only by trusting her powers can Beka save the underwater races, pick the right man, and choose the path she’ll follow for the rest of her life…


The first thing that comes to mind about Beka is that she isn't as hardened as Barbara was. She was sweet, trusting and pretty naive in some things. On top of that she doesn't have much confidence in herself and her position. She has spunk though and by the end she really grows into herself and her position. I liked Marcus. He had his moments, but he has a crazy past and the more I learned the more I understood him and started to root for him and Beka more. His grumpy old Dad had a place in my heart too by the end.

Although there was action, I didn't think there was as much as book 1 had. It also 'felt' like not as much happened. Which in the grand scheme of things, I guess it didn't. WICKEDLY WONDERFUL was still worth the read and I enjoyed meeting Beka.

I have enjoyed the series so far. The Babas have been interesting and entertaining. The world building is well done and I have learned something new in each book. We didn't see much of the Riders in WICKEDLY WONDERFUL, but it looks like they will be a big part of book 3. I look forward to meeting the next Baba and love interest.