UFI welcomes Author Megan Cashman. Thanks for Joining us!!

No two vampires are the same. What I mean by that is, it seems like vampires in each book, movie or TV show have their own appearances, powers, and blood drinking requirements. Sometimes these characteristics are based on folklore (the Eastern European of the vampire has had a big influence on how we see vampires these days) or at times, the author creates their own version (I never heard of vampires sparkling before "Twilight").

So I say it is safe to say writers of vampire stories got their ideas from various sources - as did I. In this post, I will discuss where the characteristics of my vampires in my book, "The Dark Proposal", came from.

Firstly, let me lay out what those characteristics are:

Some of my vampires also have difficulty stopping themselves from consuming blood from a person, which leads to suspicious deaths among humans.

So how did I come up with these traits? Allow me to explain:

Very pale skin that turns into healthier tone after feeding: Almost white skin I think is one of the hallmarks of a vampire. Having one without pale skin is like not giving a vampire fangs. It also comes from Slavic folklore that a vampire was spotted by its pale skin that turned ruddy after feeding. Plus, for my trilogy, there needs to be something suspicious about their appearance. Without the skin issue, there's no hint that something is off someone.

The ability to read minds and erase thoughts: Many vampires have done this and I think it can come from the heightened senses these undead creatures have. If they can hear and see things humans cannot see, why not human thoughts? And since I have my vampires inherit supernatural abilities, why not also erase human thoughts if necessary? If you are wondering why my vampires do not hypnotize people, like Dracula did or the vampires on True Blood, well, I did think about that. But it wouldn't have worked for my book. If Daniel was able to make Claire say and do things through hypnosis, then my story had no point, would be boring, be done in 50 pages, with the whole idea down the drain. Plus, I didn't want my vampires to be too much like their True Blood counterparts.

Move at a very quick speed: Honestly, I gave my vampires this skill because I think it is so cool to see them zip around a room in a blink of an eye. Also, when I wrote the scene where Daniel proved to Claire that he's a vampire, I just had to have him to do that. It worked so perfectly.

Turn into mist: Comes in handy, basically. I loved the 1992 flick, "Bram Stoker's Dracula" by Francis Ford Coppola, and the way it showed Dracula turning into green mist. While the mist in stories aren't green, it is still a fascinating ability to have. It adds to the mystery and fear of the vampire.

No need to sleep in coffins: I really didn't like the idea of a vampire sleeping in a coffin, even if it is basically a dead creature. It was just too archaic for me. I was also inspired by one of my favorite vampire books as a young teen, Christopher Pike's "The Last Vampire" series. His vampire heroine, Sita, didn't use a coffin and slept in a bed like anyone else.

Which leads to the next trait inspired by Mr. Pike's books...

Being able to walk around in daylight or even overcasts after many centuries: This was something Sita was able to do, although not every single day since the sun would exhaust her after a while. I also had always wondered if a vampire could walk around during a cloudy, rainy day. After all, there is no sun to fry him, right? But I do think being able to deal with some sunlight is best for more mature vampires because age does make them stronger. At least for mine.

Superhuman physical strength: Because my vampires got their traits from ancient tribal gods, why wouldn't they have the power and strength of those deities? Same goes for heightened hearing and seeing. Vampires are supposed to be, to me at least, creatures that we fear. We fear them not simply because they can kill or torment us, but because they have the supernatural ability to hunt us down easily, get us to do things other humans aren't able to, and go mostly unnoticeable in everyday life. It's hard to fear something or someone who isn't two notches stronger or skilled than you. 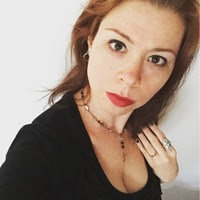 Born and raised on Staten Island, NY, Megan Cashman currently lives in Brooklyn, where she can be seen checking out the borough’s numerous coffee shops to work on her writing projects. She has a Masters’ degree in journalism, and has worked for cable news, both local and national, as well as a major New York newspaper. She is currently a freelance journalist and an adjunct professor at the City University of New York (CUNY). When she’s not writing or teaching, Megan can be seen taking nature photos with her iPhone, crocheting, doing yoga and Pilates, and trying out new dinner recipes. 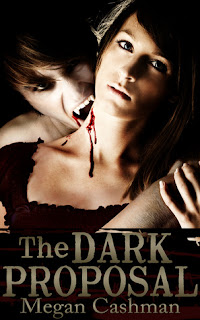 The Dark Proposal
The End of Eternity #1
Amazon Smashwords


A young woman copes with being forced to become a vampire as the man she loves reveals he is more evil than she can comprehend.

Claire McCormick has graduated from college and is eager for her new life to begin. She thought it would happen when she began dating Daniel Bertrand, who was everything she wanted in a boyfriend. But just as her dreams are about to come true, Claire’s life is turned upside down when Daniel reveals to be a bloodthirsty vampire, with the intent on making her his eternal companion. Frightened, Claire desperately tries to rid herself of him, but Daniel is too evil to defeat. She has to come to terms with reality, as she faces a vampire world fighting to survive in modern times, with many of them unaware of how devious Daniel can be.

The Dark Proposal is the first book in a trilogy that follows what becomes of Claire and the vampires.


There was a pregnant pause with both waiting for the other to speak or make the first move. For a second, she wondered if this was going to be the moment he would make her like him or kill her instead.
“No, Claire,” he spoke suddenly. She jumped, startled. “It’s up to you to say yes. And remember I did tell you I can read your thoughts.”
“Then please stop, because you’re freaking me out,” she said.
He arched one eyebrow, and for a moment, she feared he would attack her. But instead, he crossed one arm across his chest and put the opposite hand under his chin, as though contemplating something.
“I see you’ve accepted somewhat of what I revealed to you,” he finally said.
“A little.” She felt like she was preparing for war.
“What?” He sounded curious. “Is there something else you can’t comprehend?”
“Yeah,” she said in a shaky voice. Her eyes were downcast, and when she was ready, she lifted them to look right at him. “I did some research while in New Jersey. There’s a lot of websites about real vampires.”
“Yes?” Daniel raised his eyebrows.
Taking a deep breath, she said, “I think you killed Colin Willis.”
His face expressionless, he lowered his arms and closed his eyes, shaking his head. He ran one hand over his face as Claire continued.
“I read a blog about his murder. There are rumors going around that he had two holes on the side of his neck. There was no blood in his body.” She swallowed and asked, almost pleading, “Did you really do it? Honestly, Dan?”
Removing his hand, he looked right at her and said, “I think you know the answer to that question.”
She did, and whatever hope she had that he did not murder Willis quickly dissolved. She began to pant in horror at first, but then in anger. “I mean, you knew as everyone else that there was no evidence of foul play,” he was saying, nonchalantly watching her. “Plus, there were no suspects -”
Claire suddenly pounced on Daniel, arms flailing as she hit him in the face and chest. She was screaming about him being a murderer and how evil he was.
It didn’t last long because he soon caught her flying fists and held a tight grip on her wrists, holding them away from him. His grip was beyond solid, like a steel machine, and his eyes were hollow with rage. For a moment, she thought he was going to attack her again. No, he was going to kill her. She dared to hit him, dared to defy him and now she would pay the price.
He held her in his harsh eyes for a moment, and then shoved her hands away, practically pushing her away from him. “Honestly, who else would’ve done it?”