UFI welcomes Rebekah Lewis Author of Wicked Satyr. Thanks for Joining us!!

AwesomeHermes: @BacchusLikeItsHaut Who in Hades are you? Definitely not the real @DionBach judging by that name.

AwesomeHermes: @PeterPANic We had a great feast and in the midst of the celebration there was this disembodied shriek that shook the mountain…

PeterPANic: @AwesomeHermes Please tell me *somebody* didn't attempt to sneak harpies back into Olympus.

AwesomeHermes: @PeterPANic It turns out that Aphrodite and Hera have been having a spat lately. Well, Aphrodite made her move. We were eating roasted peacock.

BacchusLikeItsHot: @AwesomeHermes Clear up that nasty Herpes virus with this fantastic product … Expand

AwesomeHermes: @BacchusLikeItsHot I swear to the gods I will end you if you don't quit.

AwesomeHermes: @PeterPANic She is alive since Zeus forbade Hera from touching her, but she is NOT happy. I would hate to be Aphie right now.

BacchusLikeItsHot: @AwesomeHermes There is but one God, and you are but a blasphemer.

AwesomeHermes: @THEPegasus1 You know I can't help it. Impulse control—I have none!

AwesomeHermes: @THEPegasus1 How are you even tweeting. You're a horse. You don't have opposable thumbs OR fingers for that matter.

PeterPANic: @AwesomeHermes I have to ask, how was the peacock?

AwesomeHermes: @DionBach Can't you retrieve his IP or something with all your fancy-man resources in that company of yours?

AwesomeHermes: @DionBach it was @Calixthesexy and @OrgasmicOrestes playing games. Must be a slow day for them. They won't do it again.

AwesomeHermes: @THEPegasus1 I do want a cookie. I would ask you to bake some, but YOU DON'T HAVE HANDS. Srsly how are you typing?

CalixtheSexy: @AwesomeHermes not cool, man. You marked my good side.

AwesomeHermes: I think I bruised my hand slapping the Hades out of @Calixthesexy and @OrgasmicOrestes Calling it a night.

Rebekah Lewis holds a Bachelor of Arts in English Literature.  She is an award-winning cover artist for  digital publishers, and enjoys every minute of it when not immersed into a world of satyrs and Greek gods. Always feeling the need to be productive, she can be found creating something whether with words or images, or with arts and crafts. She resides in Savannah, GA with her cat, Bagheera. 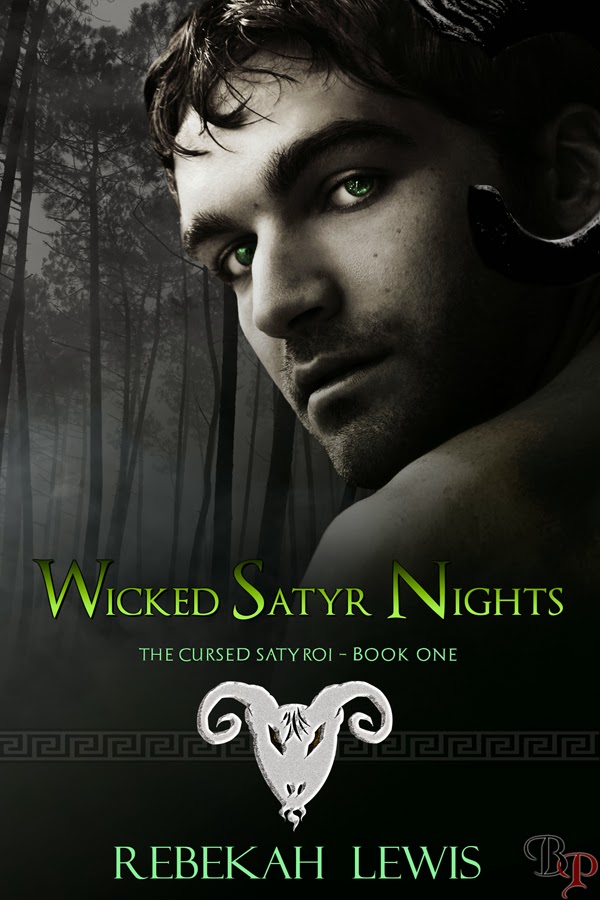 
Some creatures want to be found.

When Dr. Katerina Silverton travels into the Pine Barrens to make a documentary on the Jersey Devil, she doesn't believe she will uncover any supernatural evidence. In fact, she only takes the job because it promises funding for future projects. So it is quite a shock to Kat when she finds herself face-to-face with the legendary beast she was sent into the forest to capture on film.

In ancient Greece, the god Pan made a terrible mistake which resulted in the creation of the Satyroi: a race of immortal satyrs. Centuries later, he lives secluded in the Pine Barrens, frightening mortals by taking the guise of an abhorrent local monster. When a beautiful woman shows up in his forest looking for proof of his existence, Pan can't resist revealing himself to her.

Outside forces may be manipulating them both, pushing them together for nefarious reasons. Kat must decide if she could learn to love a satyr or if his appearance is more than she can handle. Can she resist Pan's wicked nature, or will she give into the temptations beyond her wildest fantasies?


Kat groaned as the sunlight caressed her eyelids. Mornings sucked. She opened her eyes and the events from the previous night clicked back into her memory. Peter was sitting on top of the chest of drawers, and his hands were resting against the wood edge of the piece of furniture visible between his open, denim-clad thighs. He arched a brow and smirked as he watched her become aware of him.

"It wasn't a nightmare, was it?" Her fear wasn't with her anymore. Instead, she felt the pull of sadness gripping her heartstrings. What would to happen to her? Cindy and Rick must be freaking out.
"I'm 'fraid not, vixen. I owe you explanations, and now that you slept off your denial and panic, you might be able to handle it." He snorted. "You know the word 'panic' is derived from the god Pan's enjoyment of hiding in bushes and startling trespassers as they wandered through the Arcadian forests?"

Ugh, Greek gods again? She didn't know why he found his comment so amusing, so she didn't comment on that part of his statement. "Vixen?"

Peter let out a great sigh, probably because she wasn't biting at his baited hook. "Your hair and your spirit. Reminds me of a fox because of the color and your cunningness..." He scrunched his nose up. "Is cunningness a word? Anyway, you're also a female, ergo, vixen." He pushed himself off the chest of drawers, the muscles in his arms flexing as he did so, and onto the floor. He landed lightly on his bare feet—the toed variety, not the hoofed ones. He was dressed the same as the night before. He'd lost the shirt, though, and sported just the jeans. If he was attempting to turn her on with those scrumptious abs and the thick, corded muscle that led into the waistband of his jeans, she was deeply ashamed it was kind of working.

As strange as the whole situation was, her body still reacted to his. Not as strongly as it had the first time, but the arousal was there, beneath the surface. Too afraid to notice it the night before, it had reared its head once more. She worried about her reaction to him as it couldn't be natural, yet it felt like it was.

Peter held a hand out to her, and she warily accepted it. He pulled her to her feet and led her into the hall. Kat half expected human hands holding elaborate candelabras to extend from the walls, moving as they passed, like in the movie version of The Phantom of the Opera. Except Peter would turn around, half demon-faced, and proclaim he was the devil of New Jersey rather than the Opera Ghost.