How about... even though I hate the taste of coffee, I adore the smell of it. That and freshly cut grass. Does that make me weird?  lol

If I'm not watching movies, I'm out in the garden weeding (I swear the weeds where I live have super powers—they grow incredibly fast and will not be destroyed!) I'm also a hobbyist photographer, so I'm often heading off somewhere for the day to take pics

I haven't really got any set routines as such. I can pretty much write anywhere if I need to. However, I do like to listen to music when I write, and I have a set playlist of songs that is on repeat. It's gotten to the point now that when I hear the music, the muse goes into writing mode.

I actually don't read much urban fantasy these days (I used to, but now that I'm published in the genre, I prefer to read outside of it. Feels more like relaxation that way). But my favs would be Mercedes Lackey, Anne McCaffrey, Jacqueline Carey, Katherine Kerr, Raymond E Fiest, Andre Norton, C J Cherryh...there's a ton of others, but I'm in the UK at the moment, and haven't got access to my bookshelves. I do also re-read the Lord of the Rings regularly.

My fav non-genre authors are Dick Francis and James Herbert. I also read a whole lot of regency romances.

What can you tell me about the world that your Dark Angels Series is set in?

It's set in a future Melbourne—it's where I live, and a city that I love, so it just made sense to set both it and the Riley Jenson series there. It's a world where vampires, werewolves, reapers, ghosts, witches and sorcerers live side by side with humans,  but it's also a world in which the life of all those beings now hang in the balance. If our heroine doesn't succeed in stopping the keys to hell being found and used, then it will literally become hell on Earth

Do you have a favorite scene in Darkness Splintered?

I do, but I can't say what it is because that would be a massive spoiler

Darkness Splintered is the 6th book in the series. Do you find it easier to write about Risa now or when you first started?

I'm actually find it harder to write the books now, simply because Splintered is the penultimate book in the series, and I have to start tying up all the threads both in this book and in Darkness Falls, the last in the series.

My usual answer to this question is generally the one I'm currently writing. But I guess there's one character that totally changed my life—one character that allowed me to give up work and concentrate on writing full time—and that is Riley Jenson. I think she is, and will always be, an all-time favorite.

The hardest to write—that's a tough one, because I enjoy writing all my characters, good or bad. But the hardest thing to write in any series is a character's death—and I've written a few of those over the years (Some welcomed by readers, some not!) 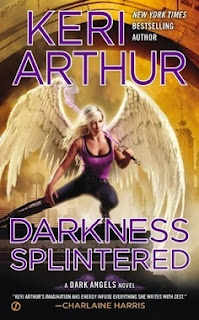 As the search for the keys to hell heats up, Risa realizes that she has no choice. For the sake of the people she loves, she must find the keys — and get rid of Hunter — before the second gate is opened and brings the world closer to all hell breaking loose...