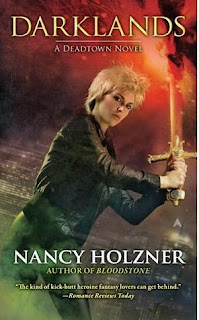 First thought when picking up the book was how much I dislike the cover, I really don't picture Vicky looking like that and it throws me off. If i didnt already like the series I probably wouldnt pick up DARKLANDS for the cover alone.

Unfortunately for Vicky (well and the world really) Pryce is back and already up to no good. It doesnt take Vicky long to come up with a game plan to once again get rid of him no matter what she has to sacrifice to do it. DARKLANDS brought out a lot of insecurities in Vicky especially revolving around her relationship with Kane. By the end of the book they seemed to finally come to an understanding but there are some new circumstances that are now in play that hopefully will bring them closer together and not push them farther apart. Kane really did some amazing things to prove to Vicky how much he loves her and I think she is finally seeing that they have something that will last.

A good portion of the book takes place in the Darklands and I hate to admit it but it was kinda boring to be there. There were a few good points which I wont point to as they will be to spoiler filled but for the most part even though I can see how it needed to happen to advance certain parts of the story I just couldn't get into it.  There is still plenty of action packed moments and there is also some great Mythology thrown in.

DARKLANDS wasn't my favorite book of the series but I still enjoyed it and I'm still going to continue reading it.