UFI welcomes A.M. Hudson Author of Dark Secrets. Thanks for Joining us!!

Hello, everyone. Thanks for having me here. I’m A.M. Hudson, author of the international bestseller, Dark Secrets—a romantic vampire mystery, with a few dark twists that leave both an uneasy and an overwhelmingly-mushy feeling in your gut.

With its ever-growing success, I often get asked very random questions about the series and its inception. So, I thought I’d share a few fun facts with you all today.

·       The series began in 2007 as a novel based in the 1800s, with a promiscuous young lad named David, who becomes a vampire while voyaging the seas in the Queen’s Navy

·       I had a hard time coming up with a surname for David. I was driving to school one day, wondering what Ara’s knight in shining armour’s surname should be, when the name ‘Knight’ hit me. It made perfect sense.

·       In an old version of Dark Secrets, Ara’s father dies and she is left with her evil stepmother, Vicki, who kicks her out of home, straight into the arms of a passing renegade/vampire.

·       There were at least seven versions of stories with Ara, Jason and David in them before I settled on this version. This is the first version that has Mike.
·       Dark Secrets was originally titled Blood Knight, but was changed before publish, as the word ‘blood’ had been used so often in vampire literature that it was cliché.

·       Book 1 & 2 were originally one book, then split into two because publishers didn’t want books that long, then combined again because I realised it didn’t really matter what publishers thought.

·       To write the books, I would often listen to music and take the story in the direction the music flowed; if it was sad, bad things happened. If the music sounded like a battle song, Ara and David would end up in a fight. This method is how the butterfly kissing scene, the first argument on the football field, and many other scenes came to fruition. I quite often have no idea where the story will go until it gets there.

·       The dedication in the first book is to my husband, Mike, who is nothing like Mike in the books, but who is, in fact, responsible for many of David’s romantic lines. Yes, they were things my husband actually said. So, anyone who thinks guys don’t really talk like just haven’t met an Aussie SNAG (sensitive new-age guy). I would pause in the middle of his love confessions to grab a pen and write them down. He’s become accustomed to my little trips to a notepad.

·       The love scene in Mark of Betrayal (you all know which one I'm talking about) made me late to drop my kids at school one day, because I woke suddenly with the whole thing playing out in my head, completely changing what it was originally meant to be, yet making it ten times better. I went into school that morning giggling to myself, my cheeks a little flushed.

·       The title ‘Dark Secrets’ was coined after hours’ of thought. I chose words that would draw me in if I were searching for a book, and since I love all things dark and secretive, Dark Secrets was perfect.

·       When writing the first draft of Dark Secrets, the vampire was Mike and the human BFF was David, but I kept writing ‘Mike’ in David scenes and ‘David’ in Mike scenes. I did this so often that I finally decided Mike and David obviously wanted to choose their own role in the story, and went with the flow. Now, I couldn't imagine it being the other way around.

Well, I think that’s enough for now. I hope you all enjoyed Dark Secrets Fun Facts, and I look forward to seeing you on the next tour stop.

A.M. Hudson loves her life in Australia and, despite wishing it would snow at Christmas, couldn't imagine living anywhere else in the world.


She fell in love with her husband at just sixteen, and since then, has added three boys to the mix.


A. M. prides herself on writing the shocking, the depthy and the highly-emotional subjects other writers steer away from. She addresses the uncomfortable with conviction and enjoys taking stories down dark paths.


Some of her heroes are Stephen King, Walt Disney, Hamish and Andy, Muse and 30 Seconds to Mars, and with influences like these, one can only imagine what stories will unfold.


When she's not writing, A. M. reads books, watches movies and chats with fans on facebook. 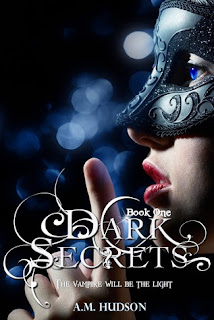 Dark Secrets
Get it free at Amazon    and  Smashwords

Since their release in 2011, Books 1 & 2 from the Dark Secrets series have come together, presented as one great book for one low price.

How can you be attracted to a guy who just said he wants to kill you?

Ara-Rose asks herself the same question. She’s been torn away from her old life, thrown into a new one in a new country, and in the midst of death, heartache and depression, she finds herself in love with a vampire—one who kills people with his teeth!

But the vampire is forbidden to fall for this human, and at the point Ara-Rose decides she can’t live without him, he pulls away and leaves her falling back to the darkness he woke her from. She will be caught up in a century-old feud among brothers, and the fight for love becomes a fight for her life.

The only question now is whether her beloved vampire will find her in time, or leave her to face a destiny he triggered with their first kiss.