UFI welcomes Lee Roland Author of The Earth Witches series. Thanks for Joining us!! 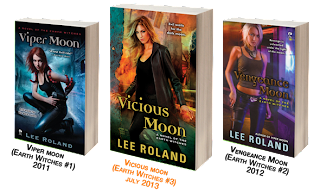 That I think the automobile is the finest form of transportation and love the open road. I love to drive, love to ride, always pushing on to see what is over that next hill.  My bio doesn’t tell a reader that I love the high-mountain American desert.  Red and gold rocks, digging for fossils, the dry hot air are all heaven to me.

Mostly I read.  When I can, I travel.

The first edit of a completed work.  The first edit means the manuscript is finished.  You’ve done it!  You’ve pushed forward and accomplished something big.  The first edit is the chance look at your story as a whole, add, subtract, move words, and build nuances of characters.  A writer is in complete control.  After that golden moment, you will sometimes find yourself manipulating your baby to fit someone else’s vision.

I require silence.  No music, television, just focus on the words before me.  Some members of my critique group will go to libraries, bookstores, or coffee shops.  Not me.  I have to be firmly positioned in the cocoon of my fictional world for it to come alive.

Illona Andrews and the Kate Daniels Series.  I’ve read each book in that series three or four times. Kate’s Atlanta is an incredible place.  Richard Kadrey’s dark, gritty Sandman Slim Series.  Kadrey is not for the faint of heart.  If you want sunshine and roses, look elsewhere.

How would you pitch the Earth Witches series to someone who has not heard of it before?

I would call the Earth Witch series Urban Fantasy with mild humor and a strong love story.  The earth witches are keepers of the world’s magic.  Servants of the Earth Mother, they battle men, monsters and personal conflicts to protect the world.

Can you tell us a little bit about the world that your books are set in?

The story is set in Duivel, Missouri, a modern Midwestern town.
Duivel, Missouri, sits on the banks of the Sullen River, a deepwater channel that eventually empties into the mighty Mississippi. Local legend among the area’s original Dutch settlers said that the devil pushed the land up out of hell. They named the city for him, the Father of Lies. Duivel—literally, the devil.
There is a section of town called the Barrows.  The Barrows is protected with a spell cast by the Earth Mother to keep most people away—to keep them safe.  It’s a “see but don’t see” spell.  You may see it, but as soon as you leave, you forget.
The Barrows is mostly block after block of dark ruins, forgotten and filled with monsters and evil men.  In the center of the ruins is a place called the Zombie Zone.  If anything earth shattering happens in the Barrows, it occurs in the Zombie.
The Earth Mother uses her witches and other special people she has chosen as warriors to act on her behalf in the Barrows.  Unfortunately, her goals are often unclear and her servants are left to make critical decisions with little guidance from her.
A history of the Barrows can be found on my website, leeroland.com.

Do you have a favorite scene in Vicious Moon?

My favorite scene in Vicious Moon is the one where our heroine, Nyx, shows our hero, Etienne, exactly what she can do with Magic.

Etienne glared at me.  “My men, my guns.  I told you to leave the Barrows and you wouldn’t.  Now, you do as I tell you.”   He whirled and stalked toward the door.  “Bring her,” he ordered without looking back.
The sudden pronouncement astonished me.  He wanted me a prisoner?  Etienne’s leadership couldn’t be faulted, but I wasn’t one of his men and he needed a lesson in manners.  And a witch’s power.  He might, as Laudine said, be immune to witchcraft, but I had other weapons.
“Hey!” I shouted just as he reached the door.  He stopped and turned. “Check this out, Mr. Immunity.”
A rock the size of a football lay by his foot.  It jumped in the air and stopped at eye level.  He backed away from it.  For all the good it would do him, he raised his gun.  The room grew still with anticipation of violence.  With all the power I could draw without draining myself, I flung the rock toward a far wall.  It punched through the wall like a cannon ball—and probably through the wall of the next building.  The impact came sharp as a rifle shot that reverberated through the empty building. An echo of thunder rolled around the massive empty room.
Darrow stepped close.  He’d be in the line of fire if the men started shooting at me, but my friend’s first instinct rose to protect me.  How completely gratifying.
Etienne stared at the wall where the rock had punched a three foot hole.  He had, in no way, lost his composure.  “That was good.  Behave yourself and I’ll let you do a magic show after dinner.”  He walked out.

My favorite character is Herschel, Nyx’s unusual and uncouth familiar. Of him, Nyx says:
The morning after my capture I sat in the hotel lobby handcuffed and feet chained, with Herschel’s massive head on my knee. His floppy jowls slimed my pants with slobber.  Herschel’s heritage seemed to be mostly Bull Mastiff crossed with a Great Dane.  He weighed in at two hundred pounds, far larger than any domestic dog.  Black as the inside of a deep mountain cave, he could be mistaken for a small pony at a distance.  I did love him, in spite of my irritation.  I’m told he arrived on the doorstep the day I was born.  His primary functions in life were sleeping, eating and farting.  And there was the incessant drooling.  Since I hadn’t seen him in ten years and my captors, the Sisters, wouldn’t speak, I had no idea how he got from Georgia to California.

The hardest character to write is Laudine, a mediocre earth with minimal powers.  Laudine can be kind and generous when she makes medicines and freely gives them to vulnerable people.  Unfortunately, greed caused her to commit an act that causes the death of someone she loved.  Maintaining the balance in the contradiction of kindness and angry guilt is difficult.

Right now, I’m working on a paranormal romance involving witches, families and power struggles.  My agent and I are discussing possibilities and direction of the story. 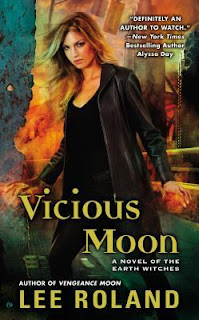 
“A powerful witch might live a long time, but a single well-placed bullet could change that. While my preferred weapon was magic, I was not averse to shooting anyone or anything offering my sister or me harm.”

Ex-soldier and earth witch Nyx Ianira is working as a PI in San Francisco when she sees the last thing she ever wants to see: the Sisters of Justice—the mysterious earth witch police force. A Triad of Sisters usually means an execution mission, but the Sisters’ only goal is to capture and escort Nyx across the country.

Nyx is badly needed back in Twitch Crossing, Georgia, the place she ran away from ten years ago to escape the stiff rules and duties of being a true witch. She wanted a life of her own. Now she’s being dragged back to her swampy hometown because another life is in danger: Her little sister is missing, and Nyx is the only one who can track her down in Duivel, Missouri.

But the key to finding her may lie with dark and tempting Etienne—a sinister criminal with a fearsome reputation, a ruthless attitude, and a total immunity to magic...