That I am supper nerdy? Lol! It was something I discovered at Staples yesterday. My love of matching office supplies, like staplers that match a post-it holder or desk calendar. And cute little paperclips and binder clips. I cannot be trusted around that stuff and I typically have no use for it!

Reading, of course! I also love baking cookies and pretending that I am good at it!

Hanging out with friends. The characters are pretty vocal about where things are going in my stories, so when I write it’s a lot like having a conversation with a friend- with an occasional argument, lol!

No, I’m a pantser- by the seat of my pants- writer so there’s not usually a routine or even a solid plan!


How would you pitch Payable On Death to someone who has not heard of it before?

Have you ever made the wrong decision for what seemed like the right reasons? That’s Jax. Except she sold her soul to the Devil. Eternal damnation isn’t all it’s cracked up to be so she’s spending every opportunity doing good deeds to earn her way back into heaven. But it isn’t that easy and more than her soul is at stake. She’ll be given a shot at redemption…. But the Devil always gets his due.


Can you tell us a little bit about the world that Payable On Death is set in?

This book is set in Baltimore, Maryland. It’s pretty close to home and I wanted to use some popular local haunts in the story. The names have been changed to protect the innocent….. just kidding- but the places in the book are real. I highly recommend the cinnamon rolls at Blue Moon Café or having a drink a Mt. Royal Tavern. I wanted to show a gritty backdrop because Baltimore is gritty and can be a hard place to live. It isn’t always pretty. But despite all that it is beloved by the people who live there and I wanted to show that aspect of it too!


Do you have a favorite scene in Payable On Death ?

It might actually be Jax and not just because she’s my new release. It felt amazing to write something different, to create a new world with new characters. Sherri 2.0 is a close second, that’s a free short I wrote for Halloween, something that had been churning in my mind for awhile and was inspired by a weird thing I saw at Baltimore Comic Con, so that was pretty fun to write too!

There’s more in the works for Jax- at least two more books. I also have a couple stand alones in the pipeline- It’s All Death To Me and A Haunted Life. A Haunted Life might be next because that book has been talking to me for a while now. I’ve started another book in my Maurin Kincaide Series but I left that series at a place where it’s okay if I don’t go back to it right away- no cliffhanger ending that I am leaving unattended. ;)
__________________________________

Rachel Rawlings was born and raised in the Baltimore Metropolitan area. Her family, originally from Rhode Island, spent summers in New England sparking her fascination with Salem, MA. She has been writing fictional stories and poems since middle school, but it wasn't until 2009 that she found the inspiration to create her heroine Maurin Kincaide and complete her first full length novel, The Morrigna.

When she isn't writing, Rachel can often be found with her nose buried in a good book. An avid reader of Paranormal/Urban Fantasy, Horror and Steampunk herself, Rachel founded Hallowread- an interactive convention for both authors and fans of those genres.

More information on Hallowread, its schedule of events and participating authors can be found at www.hallowread.blogspot.com  and www.facebook.com/Hallowread . 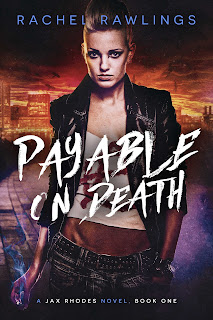 
A deal with the Devil. Demons haunting your every step. When an Angel offers you the chance to redeem yourself, you take it. Because eternal damnation isn't all it's cracked up to be.

But the Devil always gets his due.

On the streets of Baltimore redemption is..... Payable On Death.

This is a work of fiction. Names, characters, places, businesses, and incidents are products of the author’s imagination, or are used fictitiously and are not to be construed as real. Any resemblance to actual events, locations, organizations, or person, living or dead, is entirely coincidental.
Any trademarks mentioned herein are not authorized by the trademark owners and do not in any way mean the work is sponsored by or associated with the trademark owners. Any trademarks used are specifically in a descriptive capacity.
No portion of this book may be reproduced in any form (electronic or print) without permission from the author. Please do not participate in piracy or violating the author’s rights.

Copyright © April 2016 by R. Rawlings
Printed in the United States of America
PAYABLE
ON
DEATH

Hell.
Some people say there is a Hell
Where wicked souls are doomed to go.
But this, by others, is denied,
Who hold there is no Hell below.
I've often heard the place described
By certain preachers in my day,
And trembled like an aspen leaf,
As they its horrors did portray.

That such a place does not exist
I will not undertake to say;
Nor, from the knowledge I possess,
Can I assert the other way.
That there's a Hell, or that there's not,
Is more than mortal man can know;
And in the soul's eternal flight
There's none can say where it shall go.

Were I to say there is a Hell,
Can I, with proof, support the plea?
Did I allege there's no such place?
How can I prove it so to be?
J. H. Stevenson 1890
Have you ever found yourself at a crossroads? You can't go forward, you can't go back. There's only bad and worse. Those were the options facing me the day I sold my soul to the Devil. Sure, it seems like a bad decision now, but at seventeen I thought it was my only salvation. I've spent every day since trying to earn my soul back and reserve my spot in Heaven because eternal damnation isn't all it's cracked up to be.