UFI welcomes Author Shereen Vedam. Thanks for Joining us!!

Thank you for having me over. My name is Shereen Vedam and as soon as I saw the title of this blog site, Urban Fantasy Investigations, I loved the concept.

Humans have been wondering and writing about inexplicable, mysterious events, bizarre coincidences and strange occurrences since we first began walking on this earth. I suspect that’s why the Grimm Brothers have been scouring for fairy tales, why Shakespeare was fascinated by fairies and Toland wrote about druids.

In Warlock from Wales, there is a druid named Mandru who has retreated from the world because of heartbreak and disillusionment about humans. One day he picks up a book written by a human named Toland. Of all things, this human had the audacity to write about druids. What could he possibly know or guess about the subject? Mandru suspects everything in the book is likely to be far-fetched imaginative dribble. Then he begins to read the book.

Sometimes, a few of us muggles become curious enough to take a peek behind the curtain, to check outside the circle of our normal everyday experiences, and perhaps even write about it. I hope you enjoy the two excerpts below from Warlock from Wales, as Mandru starts to read Toland’s book.

“We have company.” Llyr, the protector of Mandru’s Marsh, broadcast the news to Mandru.
Ensconced in his favorite chair in his underground home, Mandru groaned at the unwelcome report. He’d barely opened the front cover of Toland’s History of the Druids. Since news first arrived of the volume’s publication, he had anticipated delving into and ruthlessly dissecting this presumptuous author’s work. Now, he had a copy in his hands and visitors interrupted?
“Who dares enter my marsh?” His thunderous voice echoed around the empty hall. Even to his ears that sounded autocratic. He didn’t care. He valued his privacy – hence he lived underground. Why the sign above ground clearly stated, “ENTER AT YOUR PERIL.” Illiterates.
“A rude Welsh warlock, master,” Llyr replied in his sedate tone, apparently unperturbed by his master’s temper.
Llyr, a gift from a water god, was notoriously difficult to ruffle. The living barrier’s temper was as serene as a lake at sunset, his emotions rarely disturbing his surface calm.
“Will make a perfect guardian for your territory,” the water god had assured Mandru six hundred years ago.
Perfectly annoying. Llyr never let anything get under his skin. Mandru scratched his right shoulder, as the thought made him itch.
“The warlock is joined by a pretty English lady, five other humans, horses, a dog and a cat,” Llyr continued.
“Cat?” Mandru’s interest overrode his irritation. “What type of cat?”
“The warlock’s familiar. A black cat.”
His interest died as quickly as it surfaced. “The defense mechanisms will take care of them. Save the cat if you like.”
Llyr may be a water god’s offspring, but while under his father’s compulsion, he could be counted on to be loyal, capable and efficient. Best servant Mandru had ever had.
He couldn’t imagine what placid Llyr could have possibly done to so enrage his father that he had imprisoned his son in the services of a druid to teach him obedience. Whatever the deed, Mandru had another three hundred years in which to enjoy Llyr’s services. Thank heavens for rebellious teenagers.
* * *
Mandru skipped over the boring abstract of Toland’s life and delved into his first letter to Lord Viscount Molesworth. Toland spoke more truth about druid modes of communication than Mandau had expected him to have uncovered.
Llyr’s next report was both unwelcome and untimely. “I like her, master.”
“What?” Mandru pulled himself out of Toland decrying how druid theology and philosophy was mainly passed along by traditional poems from master to disciple instead of in written accounts. How else could druids ensure their secrets remained hidden? By sharing it with every fool who could read? Not that rampant literacy was a great problem in this region.
“Master,” Llyr repeated, “I like her. I do not wish to kill her. She is intelligent and imaginative. Traits normally absent among humans.”
“They’re still alive?” he asked, surprised.
“The chilling fog has arrived and the demolition water comes. I want to save her.”
“What you want is irrelevant. You will follow orders.”
The barrier remained silent. Good. He hated servants who argued. Especially a servant who was also a powerful immortal. Arguments were a sign of disobedience. He couldn’t afford to encourage that or he risked breaking the magical compulsion that held Llyr captive.
He ran his finger along the page looking for where he’d left off.
“She befriended the cat,” Llyr said. “She reminds me of Rowena.”
His finger stilled as the blood drained from his heart and constricted his chest. “Unfair!”
“I like her. Permit me to save her. As you could not save your daughter.”
Slowly, Mandru unclenched his aching jaw. Memories buried deep in his soul flooded back. Just as Llyr had planned, the fight left him.
“Rowena liked cats, too.” With those words Mandru gave his tacit agreement to save the intruders to his disloyal, unrepentant and inefficient servant.
How could he have forgotten what the Romans did to his child? How could he have almost done the same? “Thank you for the reminder.”
“I live to serve, master.”
Mandru absently tapped the book lying ignored on his lap. Perhaps it was time he wrote his account of ancient events. Some secrets should be revealed to remind people not to repeat atrocities. 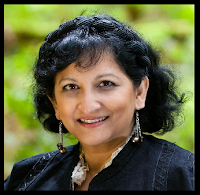 Once upon a time, USA Today bestselling author Shereen Vedam read fantasy and romance novels to entertain herself. Now she writes heartwarming tales braided with threads of magic and love and mystery elements woven in for good measure.

Shereen's a fan of resourceful women, intriguing men, and happily-ever-after endings. If her stories whisk you away to a different realm for a few hours, then Shereen will have achieved one of her life goals. 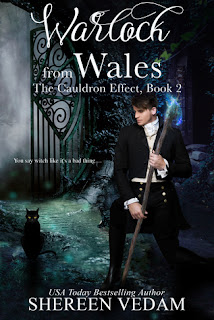 A historian in search of truth. A warlock charged to stop her.

When Hugh is yanked from his apprenticeship and summarily assigned to guard a human female, he is justly incensed.

But when a water demon snatches her from under his nose, he sets off on a desperate race to save her, and prove he is a warlock to be reckoned with.


The Honorable Mary Bryght, eighteen-year-old daughter of the late Viscount Holywell, faltered and came to a startled halt. She’d been traveling through the woods to her friend's home to deliver some astonishingly grand news about her brother. A sound drew her gaze toward a strand of willows that drank from a small pond. There, a stranger in a dark cape watched her, tapping a riding crop against his Hessians. At the malevolence emanating from him, the hairs on Mary’s arms stood to attention.
In the space of one glance, her mood shifted from cheerful to fearful. She swallowed, tasting dread, and swiftly gauged how fast she must run to reach Rose’s cottage before this stranger’s long strides reached her. She took one deep breath in readiness to sprint, when the man appeared at her side, his large hand grasping her upper arm so hard it pinched.
She cried out. He dropped his riding crop and covered her mouth with his hand, swamping her senses with a pungent aroma of horse sweat and leather.
Fifteen feet! That’s how far away he’d been. Yet, he had closed the distance between them as if it had only been two feet. Heart pounding in terror, she kicked his shin, bit hard onto a gloved finger and with her free hand, punched his throat as her father had taught her.
He grunted and loosened his grip.
Mary tore away and ran. Within a half dozen steps her body froze. There was no other way to describe the bizarre experience. She could not shift one foot, one hand, one finger. She was a statue in mid-motion.