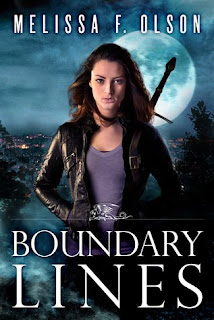 
Fitting into the Old World isn’t going very well for Boulder boundary witch Allison “Lex” Luther: she may have earned a place in a vampire’s service, but now it seems as if every supernatural creature in town has found a reason to hate her. And when Lex and her partner are assigned to investigate the suspicious disappearance of two vampires during the night of the full moon, they find themselves with more questions than answers.

The crusade for answers will lead Lex all over the Colorado Old World, from a prison cell for a broken werewolf to a haunted Denver brothel. And when Lex determines the responsible party, the hunt is just beginning: something has been awakened in Boulder, something as old and powerful as it is terrifying. Only the woman with death in her blood can stop what’s coming.


I enjoyed getting to know Lex and the other characters of the Boundary Magic series in book one, BOUNDARY CROSSED, and BOUNDARY LINES made me like the world and the characters even more.

Lex has to figure out what is causing the magic to surge in Boulder with the help of her partner. Along the way we get to know some werewolves, we learn more about the characters and we also get a little bit of romance. On the subject of romance, I do like Lex's growing relationship with the vampire. I hope they can keep up the chemistry in future books.

As far as secondary characters go. I think Maven is an interesting character. She can put the smack down, but I find her to be very likable and Lex and her have a very good working relationship so far. Simon and Lily continue to be a huge help to Lex. They both grew on me right away in book one and I always look forward to seeing what they will bring to a situation.

One thing that is really bothering me is that Lex still hasn't told Charlie's dad what is going on and what role Charlie plays in the supernatural world. Keeping him in the dark is not only dangerous for Charlie, but can lead to situations that just happened to happen in BOUNDARY LINES. I hope we don't have to read a whole other book with him in the dark and I hope that he takes the news well.

There was a good amount of action in BOUNDARY LINES. There is a pretty big battle towards the end and it was very well put together. I like that Olson ties her Scarlett Bernard series into this one. If you happen to like that series or are looking for something new, give the Boundary Magic series a try.