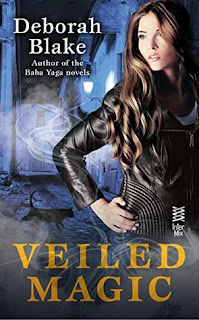 
Since Witches came out of the broom-closet in the early 21st century, they have worked alongside humans as police officers, healers, stock traders, and more. But they aren’t the only paranormal entities in our world…

Police officer and Witch Donata Santori spends her days interrogating dead witnesses by summoning their spectral forms. Normally the job is little more than taking statements and filing reports. But when she’s called in on the case of a murdered art restorer, she finds herself suddenly in possession of a mystical portrait that both the human and paranormal communities would kill to get their hands on.

Unable to take on the forces hunting her alone, Donata seeks help from two unlikely and attractive allies: a reluctant shape-changer and a half-dragon art forger. But as the three of them hurry to uncover the truth about the powerful painting, Donata realizes that she’s caught in the middle of not one but two wars—one for possession of the painting’s secrets and one for possession of her heart…


I really enjoy books where the main character is a police officer and I have enjoyed Blake's Baba Yaga series, so picking up a review copy of VEILED MAGIC was an easy choice.

VEILED MAGIC starts off on the slow side, but things really pick up when multiple people start threatening  and giving Donata ultimatums to get her to do what they want. I enjoyed Donata's character. I liked what she does for a living with her magic and I liked her personality. There are actually some great secondary characters —as well as some animals— that are involved in VEILED MAGIC. Grimalkin and Elymr in particular really stole the show when they were in a scene.

Are you ready for a love triangle? Donata meets Peter for the first time in VEILED MAGIC, and they certainly have an attraction. I really thought there would be more romance between them, but then enters Magnus. Donata had a previous relationship with him and they are just friends now, but they have a history that shows and they actually DO get romantic in VEILED MAGIC, but Donata is adamant that their relationship would never work because of who and what they are and she is still pulled towards Peter. I wasn't too thrilled with the way the love triangle part of the story line left off, but maybe book 2 will make it up to me.

I enjoyed reading VEILED MAGIC, but I wish we got more of the cop feel I was looking for. Donata is an officer, but the case she is working on takes her out of the police station where she investigates with those that aren't officers, which to be fair, is stated in the blurb. I am hoping book two—which I will be reading—will have a bit more station action.