Promo + Giveaway: Turned by a Tiger by Felicity Heaton 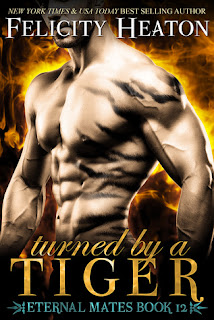 
BOOKS IN THE SERIES
Book 1: Kissed by a Dark Prince (Only 99c at all retailers!)

Book 2: Claimed by a Demon King

Book 3: Tempted by a Rogue Prince

Book 4: Hunted by a Jaguar

Book 5: Craved by an Alpha

Book 6: Bitten by a Hellcat

Book 7: Taken by a Dragon

Book 8: Marked by an Assassin

Book 9: Possessed by a Dark Warrior

Book 10: Awakened by a Demoness

Book 11: Haunted by the King of Death

Enter the grand tour-wide giveaway to win a $25, $50 or $75 Amazon Gift Card at the Turned by a Tiger book page. This giveaway is international and open to everyone, and ends at midnight on July 16th.