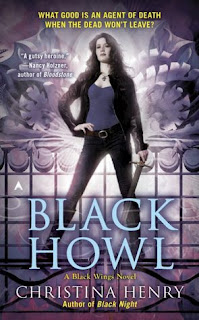 
Agent of Death Madeline Black is finding out that some of the spirits of Chicago aren't ready to cross over.

Something is wrong with the souls of Chicago's dead. Ghosts are walking the streets, and Agent of Death Madeline Black's exasperating boss wants her to figure out why. And while work is bad enough, Maddy has a plethora of personal problems too. Now that Gabriel has been assigned as her thrall, their relationship has hit an impasse. At least her sleazy ex-fiancé Nathaniel is out of the picture — or so she thinks...

Another great installment of the Madeline Black Series. I have always loved Maddy's character. She is stronger then some give her credit for and has learned a lot since book 1 about her self and what she can do and be. Beezle continues to be one of my favorite sidekicks. He provides endless amounts of humor to about every situation Maddy finds herself in. Most of the book revolves around Madeline helping Jude find his missing Alpha and the packs children.  There is plenty of action as she fights off demons and humongous spiders that would give an arachnophobe like me a heart attack. Along for the ride is of course Gabriele the man that Maddy loves but that refuses to be with her. There are some great developments between them in BLACK HOWL as well as some major heart ache and loss. Lucifer continues to stump and surprise me. Just when you think he is using Maddy for his own evil plans he shows what is under his cold exterior and lets us see some real (at least it seems real) support and emotion from him. Most of the characters we have loved from the previous books are also in BLACK HOWL next to Maddy as she uncovers betrayal and plots that will rock her world even more then it was already rocking.

There were a lot of emotions that came out of BLACK HOWL and I was sorta expecting the ending news to happen at some point but it was still EVIL EVIL ending the book like that Christina. Just plain Evil. Dying to read book 4 and BLACK HOWL isn't even officially out yet, hopefully the wait wont be to long.