UFI welcomes M.L. Brennan Author of Generation V. Thanks for Joining us!!

Well, firstly that I’m a Cancer. And secondly that I think astrology is probably the most ridiculous (barring phrenology) of the pseudosciences.

I love to read, and I’m also a big fan of tabletop gaming – Settlers of Catan, Munchkin, and Puerto Rico are all great ways to spend an afternoon.

The planning and discovery part. I love when I’m thinking about a character or a story, and it’s just sitting in the back of my brain for weeks or months at a time, and then periodically – during a commute, talking to a friend, dozing, eating pie – suddenly some wires cross and you figure out what you want to do with it. Those kind of “eureka!” moments always excite me, and that’s when I really feel at my most writerly.

In terms of the physical process of writing – not as much anymore. I used to be extremely picky about how I would write – usually in the evening, and only when I was really in the “right” frame of mind. A lot of that has fallen away, partially because of learning how to write to a deadline, and I think that was really a great thing for me, because now I can sit down and write even when I’m not particularly in the mood to do so.

In a larger sense of routine, yes, I never start writing a book unless I’ve completed all the major planning and I know where I’m going. I have a fairly methodical personality, so this is the style that suits me the best. I also like the ability to start working on a manuscript and not have to worry about getting tangled in timing snafus, since I’ve already worked those out in the planning phase.

I’m a huge fan of Patricia Briggs, and I really love the Mercedes Thompson series. Rob Thurman’s Cal Leandros series, and the wholly underappreciated Trixa books, were also big influences for me. Anne Bishop’s Written In Red is a huge entry into the genre, and I think it’s one of the most amazing books I’ve read this year. I’ve also been just hugely impressed by Cassie Alexander’s Edie Spence books, and I waiting with bated breath for Shapeshifted to come out.

How would you pitch Generation V to someone who has not heard of it before?

Here’s the elevator pitch: Fortitude Scott has a useless degree, a minimum-wage job, a cheating girlfriend, and a roommate who stiffs him on the rent. And he’s a vampire… mostly. But when a little girl is kidnapped, suddenly he’s the only one who is willing to try and do something about it, so he teams up with a wise-cracking fox shifter and heads off for a rescue mission that will very likely kill him.

Can you tell us a little bit about the world that Generation V is set in?

It’s our recognizable, contemporary world, but with a whole shadowy, hidden side, and in that part are all kinds of supernatural creatures. I use a variety of creatures, notably vampires, but I spend a lot of time rethinking and reconstructing each kind of creature trope to make it work in the world that I’ve set up.

For instance, one of the major changes I made to my vampires is that instead of undead humans, these are a completely separate species with their own biological lifecycle. So no more immortal vampires wafting around the castle – these are creatures with a set number of years to live, and over that time they will be growing older and pursing various goals. One of those goals is basic biology – they want to reproduce. But vampire reproduction is exceedingly difficult in this world, and one of the results of this is that vampires as a species are actually teetering on the brink of extinction.

My biggest motivation in making this pretty major change was that I wanted my vampires to have stresses and motivations. A species facing extinction? That’s a pressure on both the social and the individual level. My vampires don’t have the out of just biting humans and making more of themselves, they have to actually reproduce. And as for that – well, I took a few inspiration points from a few parasites for how that takes place. J

Do you have a favorite scene in Generation V?

Any scene where Fortitude is interacting with the kitsune (fox shifter) Suzume was just a pleasure to write. They came from such different backgrounds, had completely dissimilar viewpoints and goals, their moral compasses point in opposite directions, and yet these were two characters who just had fun on the page together. I loved it.

Suzume was always easy to write. She had a very distinct voice and a very strong personality, so any scene where I inserted her I knew that interesting things would happen. The hardest character actually gave me such issues that I just threw up my hands and decided that I was not going to include her in this book. She shows up in the next book, Iron Night, and she was always a nightmare to work with on the page.

The second Fortitude Scott book, Iron Night, is going to be published in January 2014, and I’m contracted for a third book after that, so hopefully I’ll be very busy for the foreseeable future!

My first novel, Generation V, is coming out in May 2013 from ROC Books, and is a work of urban fantasy.

I cut my baby bibliophile teeth on my older brother’s collection of Isaac Asimov and Frank Herbert, but it was a chance encounter with Emma Bull’s War For The Oaks as a teenager that led to genre true love. Today, I’ll read everything from Mary Roach’s non-fiction to Brandon Sanderson’s epic fantasies, but I’ll still drop everything for vampires and werewolves in the big city.

I hold an advanced degree in the humanities, and I am work as an adjunct professor, teaching composition to first-year college students. I am currently hard at work on the second Fortitude Scott book, Iron Night, which will be published by Roc in January 2014.

Find M.L. and his books 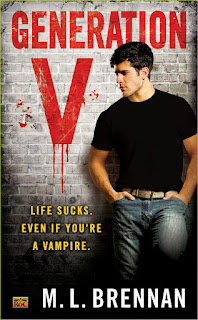