Review: To Kill a Kingdom by Alexandra Christo 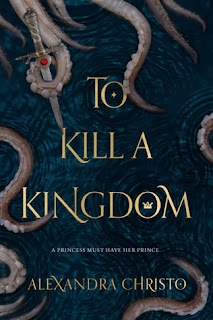 Princess Lira is siren royalty and the most lethal of them all. With the hearts of seventeen princes in her collection, she is revered across the sea. Until a twist of fate forces her to kill one of her own. To punish her daughter, the Sea Queen transforms Lira into the one thing they loathe most—a human. Robbed of her song, Lira has until the winter solstice to deliver Prince Elian’s heart to the Sea Queen or remain a human forever.

The ocean is the only place Prince Elian calls home, even though he is heir to the most powerful kingdom in the world. Hunting sirens is more than an unsavory hobby—it’s his calling. When he rescues a drowning woman in the ocean, she’s more than what she appears. She promises to help him find the key to destroying all of sirenkind for good—But can he trust her? And just how many deals will Elian have to barter to eliminate mankind’s greatest enemy?


I wasn't really sure about TO KILL A KINGDOM after reading the blurb, but it didn't take me long after starting to get into the story.

I didn't think I was going to like Lira, but once her story started unfolding and we really started getting to know her it was easy to like her. Elian I liked right away. He was honorable, determined and is a prince to boot so what wasn't there to like? There wasn't an instant love between the two—which was fantastic—in fact, they tried to kill each other at first sight. The romantic feelings between the two were slow to form—REALLY slow—and they both tried to fight the feelings. When it mattered, they were both on the same page.

I enjoyed the world of TO KILL A KINGDOM. I like the way the story unfolded and the pace was easy and smooth. The secondary characters were lovable and brought a lot to the story.

My only real complaint after reading TO KILL A KINGDOM was that I wish we would have gotten more at the end. We get a glimpse of the aftermath, but I wouldn't have minded seeing more of it. I love a great epilogue. That didn't distract from the great story though.