Guest Post & Giveaway: A Sliver of Shadow by Allison Pang

UFI welcomes Allison Pang Author of A Sliver of Shadow. Thanks for Joining us!!


I glanced up to see three daemons bearing down upon us.

Two of them were hooded and cloaked, their faces masked within the shadowed darkness of something akin to black burlap. But the one in front looked like the lead singer of a J-Rock band. The low-slung leather pants would have given Brystion a run for his money in the smexy brooding department, but the sleeveless shirt and the laced armsocks that reached midbicep catapulted him straight into visual kei. His bangs alone were a peacock’s tail of spikes that defied explanation, the rest of his artfully tousled hair cascading down his back in a hue of extravagant greens and purples. The effect was offset by a great cape sweeping behind him in an ebony wash of feathers.

I couldn’t quite help the slow whistle from escaping my pursed lips. “Who’s the glamurai?”

The daemon raised a sardonic brow at me. “Not quite.” He turned to Melanie, his expression unreadable. “Not yet. I was a sin eater once. Do you remember which of your sins I was forced to consume?”

Although much of the overall faerie mythology that I use in A Sliver of Shadow is often based in traditional Celtic fairy tales, I decided branch out a little bit by tapping into some more common Asian lore.

I’ve got two OtherFolk beings that are clearly based in Asian mythology – Nobu, who is, for all intents and purposes, loosely based on a Shinigami, which is a type of death spirit…and Kitsune, who is a fox spirit. Neither one falls particularly easily under the realm of the CrossRoads and their three paths (the Heaven, Hell and Fairy categories, although Kitsune is currently hanging out in Faerie, and Nobu has become more of the daemonic sort.)

I’m not going to get into Nobu all that much in this post. Partially for spoiler reasons, but also because his back story is fairly complex and very much entwined with that of Melanie (the magic violin player). There’s more to come in A Trace of Moonlight about their relationship so that’s about all I’m going to say about him.

She stared hard into her cup. “Are you sure that is all you seek?”

“Of course not,” I said wryly. I didn’t like the way she was twisting the request. “Besides, what difference does it make? The prince, a way out of here, and a chance to find the woman who betrayed us. That’s all I seek right now.” My thoughts tumbled over an image of Ion for a moment.

Kitsune reached down at her side and pulled out a small spool of red thread. “Destiny weaves as it will and the path to your goals may not be as direct as you’d like.”

I huffed a sigh and pushed to my feet. “Esoteric words of wisdom don’t impress me. And I’ve had enough of destiny to last the next few lifetimes, so you’ll forgive me if I decide I don’t want to be a part of it.”

“You cannot outrun what is faster than you.” She thrust the spool into my hands. “When you leave here, simply roll the thread upon the ground and it will take you to your heart’s desire.” At my snort of disbelief, her ears flattened. “No one will bother you if you follow the thread. Interfering in another’s destiny is . . . unwise.” The last part was said with an exceptionally feral grin, her teeth clipping hard upon each word. I caught the faint outline of a fox muzzle overlapping her mouth, nearly superimposed upon her face, but it was gone before I could truly see it.

Kitsune is another story. She’s the de facto leader of the Barras – which is a sort of traveling kingdom, made up of the outcast UnSeelie Court. There’s an edge to her because she’s had to sacrifice so much to keep her people alive.

The idea of the red thread is often seen in anime or manga – specifically between two lovers. It’s a metaphysical representation of the connection between two people – that no matter how far apart they are, they are always connected by a red thread. (Often tied on the pinkie finger.) In this case, I use it as more of a way of finding one’s fate or destiny, which of course rarely works out the way we think it should.

Certainly not in the case of Abby, anyway. 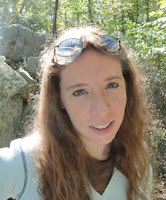 A marine biologist in a former life, Allison Pang turned to a life of crime to finance her wild spending habits and need to collect Faberge eggs. A cat thief of notable repute, she spends her days sleeping and nights scaling walls and wooing dancing boys….Well, at least the marine biology part is true. But she was taloned by a hawk once.  She also loves Hello Kitty, sparkly shoes, and gorgeous violinists. She spends her days in Northern Virginia working as a cube grunt and her nights waiting on her kids and cats, punctuated by the occasional husbandly serenade. Sometimes she even manages to write. Mostly she just makes it up as she goes. 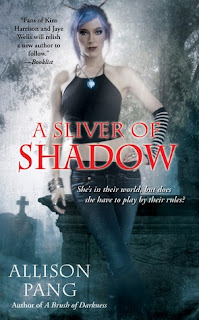 
Just when her new life as a TouchStone — a mortal bound to help OtherFolk cross between Faery and human worlds — seems to be settling down, Abby Sinclair is left in charge when the Protectorate, Moira, leaves for the Faery Court. And when the Protectorate’s away…let’s just say things spiral out of control when a spell on Abby backfires and the Faery Queen declares the Doors between their worlds officially closed.

The results are disastrous for both sides: OtherFolk trapped in the mortal world are beginning to fade, while Faerie is on the brink of war with the daemons of Hell. Along with her brooding elven prince Talivar and sexy incubus Brystion, Abby ventures to the CrossRoads in an attempt to override the Queen’s magic. But nothing in this beautiful, dangerous realm will compare to the discoveries she’s making about her past, her destiny, and what she will sacrifice for those she loves. 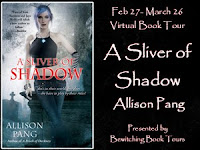