UFI welcomes Claire Ashgrove author of The Curse of the Templars Series  . Thanks for Joining us!!

His quiet voice urged her eyes back to his.

“I will make you a promise. When I return it, I will do everything in my power to establish a sacred resting place for such an important item. A place where it can be viewed, its story can be told, and ’tis safe from thieves and those who would wish to use it for corruption.”

For one endless moment, Chloe couldn’t breathe. Compromise, she hadn’t anticipated. But what he offered was exactly what she desired—if the relic proved to be what he claimed. She didn’t know how to respond to such a generous offer. Didn’t know how to look away from his mesmerizing gray eyes that revealed such honesty she could feel his words in her soul. He meant it. He really meant it.

So had Blake, at one time.

She shook off the spell and frowned. “What if it isn’t the Veronica? What if it’s just another cloth, or what if nothing’s inside at all?”

A smile lifted the corners of his mouth. “’Tis not, but should it be, you may do what you will with both the reliquary and the contents. We could open it tonight and solve those questions.”

“Don’t be silly. There are processes. Protocols I established with my team to ensure every relic was treated the same way.” Her frown deepened as she remembered her students and her brother. “This isn’t just about me and you. Julian wants to witness the opening. Andy’s excited about it also. I have a whole team that came here in the middle of winter, hoping to find something of significance. Now we have. I won’t cut them out. And I won’t jeopardize the integrity of my hard work among my professional peers either.”

“I shall respect that.” His thumb stroked over the back of her palm, stirring to life all the awareness she so desperately wanted to ignore. Tingles raced up to her shoulder. Her pulse stuttered. In the core of her soul, something wholly unfamiliar awakened to that gentle back-and-forth motion.

“Will you trust I shall reveal the cloth when the time is appropriate?” His eyes said something else, a plea she didn’t dare consider: Will you trust me?

She glanced down at their joined hands, the warmth of his palm as enticing as water after a hot day amid the Egyptian sands. Strong fingers. A grip meant to soothe, yet prominent evidence of the power in his hands. Altogether masculine. Wholly appealing.

Against her will, her fingers tightened around his. She nearly sighed at the delight of holding on to him. They sat in her room, avoiding the subject of their earlier kiss. It had been so long . . . Did she dare take a leap of faith and believe in what he offered? His words and the physical pleasure?

For more about The Curse of the Templars, discover all the books at Claire’s Templar Webpage 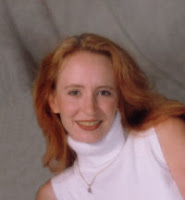 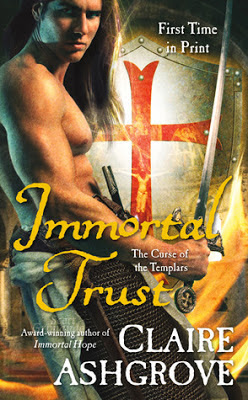 Immortal Trust
The Curse of the Templars #3


When archaeoloist Chloe Broussard acccepts the contract to lead a dig in Ornes, France, she has no idea she will uncover the Veil of Veronica. When she does, she discovers a danger far greater than the demons she's confronted since childhood. Azazel wants her, as well as the Veronica, and his chosen minion is her brother. Her hope lies with immortal Templar Knight Lucan. Her life depends on oaths she knows nothing about.

For countless centuries, Lucan of Seacourt has lived with the knowledge that his brother killed their family. Now, as Azazel's darkness eats away at his soul, old betrayal stirs suspicion. He trusts no one. Not even the seraph who can heal his dying spirit.

With the fate of the Almighty hanging in the balance, Lucan must find faith in something more terrifying than the dark lord's creations. He must learn to believe his heart.