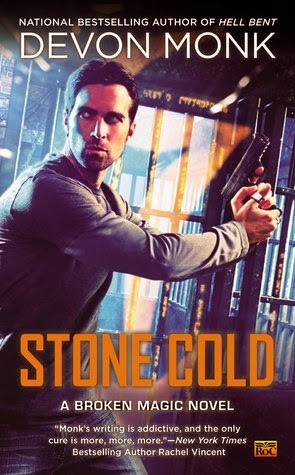 Marked by Life and Death magic, Shame Flynn and Terric Conley are “breakers”—those who can use magic to its full extent. Most of the time, they can barely stand each other, but they know they have to work together to defeat a common enemy—rogue magic user Eli Collins.

Backed by the government, Eli is trying to use magic as a weapon by carving spells into the flesh of innocents and turning them into brainless walking bombs. To stop him, Shame and Terric will need to call on their magic, even as it threatens to consume them—because the price they must pay to wield Life and Death could change the very fate of the world...and magic itself.

STONE COLD is the second and last book in the Broken Magic series. The series was very well formed with the Allie Beckstrom Series so it was nice being able to enjoy the story of Shame and Terric without all the background we already know about. I don't feel that someone that is new to the world would be seriously lost, but I think the back story and character development that the Allie Beckstrom Series brought makes this one that more enjoyable.

Since you most likely read HELL BENT before picking this up you know the score what is going on. I feel that Shame really does hit rock bottom in STONE COLD. He seems to have given up completely after losing the woman he loves and not being able to control his death magic. He is deathly afraid of killing those he loves so he just pushes everyone away and isolates himself. Terric is having a hard time with his life magic but when he works magic with Terric it all seems to even out. They are both pretty stubborn so they fight their friendship and magic on their own until they have no choice but to work together, and they do it fabulously.

As with all the other books in the series there is a ton of action and twists to the story line. There are a lot of bumps in the road but STONE COLD ended on a perfect note for everyone involved. (And I loved watching Allie and Zayne become parents) It all just felt finished. Everyone seemed to be in a better place and on better terms than they have ever been. I will miss the gang!