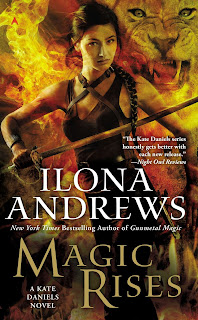 Atlanta is a city plagued by magical problems. Kate Daniels will fight to solve them—no matter the cost.

Mercenary Kate Daniels and her mate, Curran, the Beast Lord, are struggling to solve a heartbreaking crisis. Unable to control their beasts, many of the Pack’s shapeshifting children fail to survive to adulthood. While there is a medicine that can help, the secret to its making is closely guarded by the European packs, and there’s little available in Atlanta.

Kate can’t bear to watch innocents suffer, but the solution she and Curran have found threatens to be even more painful. The European shapeshifters who once outmaneuvered the Beast Lord have asked him to arbitrate a dispute—and they’ll pay him in medicine. With the young people’s survival and the Pack’s future at stake, Kate and Curran know they must accept the offer—but they have little doubt that they’re heading straight into a trap…

"Ilona Andrews" is actually two people, Gordon and Ilona Andrews. We write urban fantasy, an odd hybrid of a genre that includes elements of mystery, fantasy, and horror in a modern setting. Right now we are working mainly on our Kate Daniels series. We don't take ourselves too seriously.