UFI welcomes Maria Lima Author of The Blood Line Series. Thanks for Joining us!! 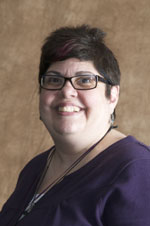 What can you tell my readers about yourself that they might not know from looking on your bio or reading in another interview?
I am crazy addicted to Twizzlers. The basic strawberry kind. I think it’s because they are chewy.
What do you enjoy doing on your down time?
One of my new hobbies is digital photography. I recently bought a digital SLR camera and am looking forward to having time to take pictures! Back in the “olden” days, I had a Pentax SLR (film) and my own darkroom setup. This was eons ago.
What is your Favorite part of writing?
Having written! I do also enjoy world-building. Part of me is a social/cultural anthropologist at heart. I love figuring out how society works, how my characters fit into the society, etc.

Do you have any certain routines you must follow as you write?
1. Lots of water--I have a 40 oz Kleen Canteen that I fill up.
2. Snacks -- need to have the crunchy snacks!
3. Quiet -- I like a calm, quiet place. I write at my desk on my iMac. No TV on, no music.
What are some of your Favorite books or Authors in the Urban Fantasy/ Paranormal Genres?
I’ll go with authors, since I tend to fall in love with an author and devour all their books. In no particular order: Tanya Huff (who’s Vicky Nelson series was instrumental in kickstarting my own writing career); Seanan McGuire; Jenna Black; Jaye Wells; Christopher Golden, Tim Sniegoski, Charlaine Harris... I could list tons more.
How would you pitch The Blood Lines series to someone who has not heard of your books before?

Family ties--of the twisty and supernatural kind, smack in the middle of the Texas Hill Country.
Can you tell us a little bit about the world that The Blood Lines series is set in?
The series is set in the Texas Hill Country, an area that is still a bit out of the beaten path and full of independent thinkers, as well as good ol’ country boys. It’s a closed universe, i.e., humans don’t know about the supernaturals, which can create a whole lot of challenges, especially in this digital age. Keira’s clan tends to blend in as much as possible with humans, yet still keeps itself separate for important things.
Do you have a favorite scene in Blood Sacrifice?
There is a scene near the end that I wrote before I wrote most of the rest of the book. I can’t really talk about it, as it’s a pivotal scene in the story. It was in my head long before I had worked out the rest of the details.

Which character was your favorite to write about? What about the hardest to write about?
Tough, tough question. As much as I love writing Keira, I enjoy writing about Tucker more. He’s a character that surprised me in that I found myself liking him more and more as the series went on. He’s the big brother I never had, so I like creating his story.
The hardest? Bea. I adore Bea in her role as Keira’s friend, but as Keira’s life changes and she becomes more a part of the supernatural world, Bea’s role is more difficult to figure out.
Blood Sacrifice is the 5th book in the series. Have you found it any easier or harder to write the series as it gets farther along? 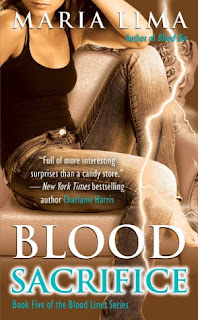 Talk about wedding crashers from hell. Keira Kelly and her sexy vampire king, Adam, are about to tie the proverbial knot—sort of—when an uninvited blood relative shows up to cast a long, dark shadow over the happy occasion. Adam’s brother Gideon comes bearing the one-size-fits-all gift of bad news: an ancient, convoluted Challenge thrown down upon the entire Kelly clan. It seems the dreaded forces of the Dark Fae have declared war on Keira’s family, and at stake is the land that is rightfully theirs. But while the Kellys gather their troops in a historic San Antonio hotel to strategize, there’s mayhem back in Rio Seco. The old cemetery is vandalized, fires break out, and—worst of all—the Kelly clan matriarch and leader, Keira’s great-great-grandmother Minerva, goes missing. Should Keira risk breaking the Challenge rules by returning to her beloved home, or should she continue the waiting game that seems the only other option? With everything she loves and maybe even her life on the line, she has only one chance to get the answer right.

Winner: Second Grave on the Left by Darynda Jones Audio


Thank you to everyone that entered!!
PRIZE: - One Audio Copy of Second Grave on the left
* Audio copy is opened & has been listened to once for a review

The winner chosen by Random.org is…
acm05

Congrats!! I have emailed winner who has 48 hours to respond with mailing address or I will pick another.
Posted by StacyUFI at 2:59 AM No comments: