UFI welcomes Jess Haines Author of The H and W Investigations series. Thanks for Joining us!!

Hmm. I’m sure if you look hard enough, you can find out all kinds of weird stuff about me. My obsession with Ryan Reynolds, my love of chocolate and coffee, and that I know what crickets taste like.

As far as something that hasn’t been covered?  Maybe that I hate broccoli and cauliflower.

Watching movies and spending way too much time chatting on Twitter. Once in a while, I like to sketch, but mostly what I do is read or write.

Plotting all of the twists and turns for my stories. I’m always operating one to two stories ahead of what’s published, so seeing people getting excited about something I wrote over a year before and had plotted out even longer always amuses and thrills me.

Mostly to make sure I have coffee, chocolate, and a dictionary close to hand. I have a tendency to do a lot of my writing while a movie is playing in the background because I got so used to writing in a noisy environment.  Strangely enough, I find it difficult to write when music is playing—it has to be a steady chatter or absolute silence or, for some reason, I just can’t concentrate.

I adore Jim Butcher and Thea Harrison.  Right now they are two of my favorite UF/PNR authors.

I’ve got quite a long list of authors I admire and whose works I love, but I wouldn’t want to bore you to tears with a laundry list.  *g*

How would you pitch the H&W Investigations series to someone who has not heard of it before?

Usually I just tell people that my heroine is human and doesn’t want anything to do with supernaturals, but keeps getting dragged into their business anyway.  That’s a bit of a deviation from the normal UF—my heroine doesn’t start out as a kickass vampire hunter. She has to work her way up the food chain, so to speak. These books are the story of how she becomes more than just cannon fodder or food, and makes her own way in a world where she’s way out of her depth.

Can you tell us a little bit about the world that the H&W Investigations series is set in?

It’s set in an alternate, present-day New York. The main difference being that, after the terrorist attacks of September 11, 2001, all the Others—werewolves, vampires, magic users, elves, etc—came out of the closet, so to speak, and are now integrated into society. Sort of. The more dangerous Others, like vampires and werewolves, have to have the humans they plan on getting “intimate” with sign contracts beforehand. Otherwise, no blood drinking or hanky-panky or any of that fun stuff.

Do you have a favorite scene in Stalking the Others?

I do, but to talk about it would be exceedingly spoilery—so I’ll tell you it’s the last couple chapters of the book. You’ll know when you read it.  ;)

It’s hard to pin that down.  I love a lot of my characters—particularly ones you haven’t seen yet.  They all have their own special significances, even Chaz, so it’s really difficult for me to pick just one.  Shiarra, of course, being the main character and all, is a ton of fun to write because it’s so funny to play someone who is so damned reluctant to have anything to do with Others. Basically, she’s my polar opposite.

Royce is tons of fun to write, especially when he’s teasing Shia.  She never has any idea what he’s thinking, so having that knowledge (and finding ways to hide it from the reader using Shia’s POV) is always an interesting challenge.

Arnold cracks me up.  He’s the most “me” out of all of my characters.  Then there is Mouse, the mute vampire who works with Royce, and her boy-toy, Christoph.  Oh, and the cab driver Shia keeps running into.  Can’t forget him.

Once you read the next book, I think you’re going to get a kick out of characters like Jimmy Thrane and Clyde Seabreeze, too.

As for the hardest, I can’t say it’s actually been difficult to write any of them. I have so much fun with these stories that I haven’t run into any issues that might make it hard to put my thoughts down on paper.

Stalking the Others is book number 4 in the series. Do you find it easier or harder to write as the series gets more books under its belt?

Six of one, half a dozen of the other. I find I spend a lot more time having to write other stuff (mostly related to promotion, like guest posts and interviews) instead of the actual books.  It’s a little distracting to go back and forth between tearing through writing the novel and then juggling writing promotional material on top of it.

Not that doing promo is a bad thing, of course, but it seems like with each book it takes up more of my time.  I have a hard time saying no when someone asks me to do a guest post or interview, even when I can’t afford to take the time to do it, so I think that it occasionally stretches me too thin.  It’s a challenge, but so far I’ve been managing okay.

I’m contracted for more books in the series, so you’ll be seeing book five next summer, and book six most likely the year after that.

There’s something else just around the bend, too. Keep an eye out for an official announcement soon… 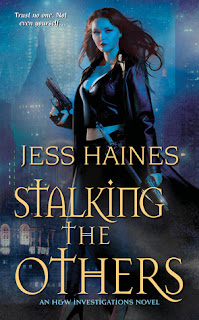 Stalking the Others
H&W Investigations
July 3, 2012


Vampires, werewolves, mages–the Others are very real, and wreaking havoc in Shiarra Waynest’s life. But now, she’s returning the favor…

Once, she was one of the good guys–or as close as a New York P.I. can get. Then Shiarra Waynest was drawn into the world of the Others. Every faction has its own loyalties and agenda. And Shia’s recent betrayal by her ex-boyfriend means that she may be on the verge of becoming a rogue werewolf at the next full moon.

Of course, with all the threats against her, Shia’s not sure she’ll live long enough to find out. The enigmatic vampire Royce wants her back in his clutches, as do two powerful werewolf packs, along with the police. Instead of going into hiding, Shia is enlisting the aid of her enchanted hunter’s belt and every dirty P.I. trick she knows. If she’s going down, she’ll take out as many of her enemies as she can–and hope that in the process, she keeps whatever humanity she has left… 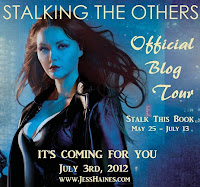