UFI welcomes Rainy Kaye Author of Summoned. Thanks for Joining us!!

A Tour of Dimitri’s House in SUMMONED

“What is in your main character's refrigerator? Nightstand? Garbage can?”

I’ve seen this set of questions in several places, and I think it’s pretty clever. The answers can say a lot about a person, and so they should also be telling about a fictional character. So let’s take a nosey look around Dimitri’s house and see what it reveals about him.

First stop, the refrigerator. SUMMONED readers can probably answer this one already: water, soda, wine, and not much else. Dim is usually beaten up and exhausted by the time he gets home from fulfilling a wish. And when he lets a wish run too long, he develops a fever. Plus, you know, he lives in the desert. So keeping cold drinks on hand is a priority. As for the wine, well, he has limited time to win temporary affection from women, and wine speeds things along. All that aside, he works for a multimillionaire so he has no need or inclination to cook. He might not be back in time for dinner anyway.

Second stop, the nightstand. Gun, condoms, and, if he’s home, his phone. That’s pretty much his life in a nutshell.

Garbage can. Manila envelopes. On closer inspection, manila envelopes containing information about his targets. This says more than just what he’s up to. It also illustrates he’s a little too comfortable in—and unprepared for—his role as a killer genie. 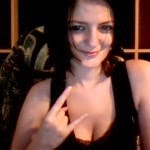 Rainy Kaye is an aspiring overlord. In the mean time, she blogs at RainyoftheDark and writes paranormal novels from her lair somewhere in Phoenix, Arizona.

When not plotting world domination, she enjoys getting lost around the globe, studying music so she can sing along with symphonic metal bands, and becoming distracted by Twitter.

She is represented by Rossano Trentin of TZLA. 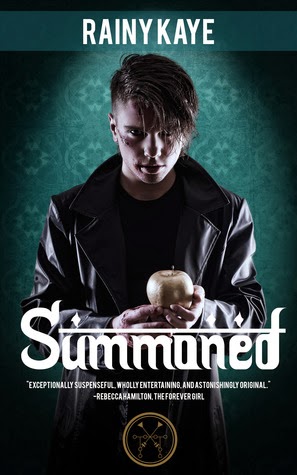 
Twenty-three year old Dimitri has to do what he is told—literally. Controlled by a paranormal bond, he is forced to use his wits to fulfill unlimited deadly wishes made by multimillionaire Karl Walker.

Dimitri has no idea how his family line became trapped in the genie bond. He just knows resisting has never ended well. When he meets Syd—assertive, sexy, intelligent Syd—he becomes determined to make her his own. Except Karl has ensured Dimitri can’t tell anyone about the bond, and Syd isn’t the type to tolerate secrets.

Then Karl starts sending him away on back-to-back wishes. Unable to balance love and lies, Dimitri sets out to uncover Karl’s ultimate plan and put it to an end. But doing so forces him to confront the one wish he never saw coming—the wish that will destroy him.

SUMMONED is represented by Rossano Trentin of TZLA.

Congrats!! I have emailed winner who has 48 hours to respond with mailing address or I will pick another.
Posted by StacyUFI at 2:30 AM 1 comment: