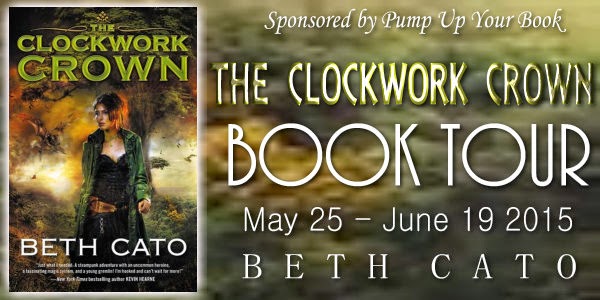 I enjoy reading of leather-clad heroines who talk and act tough and can hold their own against boorish men or ten-foot demons. I envy that gritty sort of strength. It makes me think of Sarah Connor as portrayed in Terminator 2, locked in the psych ward but honing her body to an athletic prime in preparation for judgment day.

I wanted to evoke a different sort of strength in my novels, The Clockwork Dagger and the forthcoming The Clockwork Crown. Octavia Leander is physically strong, but not from doing push-ups in a cell. She's a medician, trained as a doctor in mundane and magical methods. She can assist in hauling patients or supplies, and on her academy's farm, toss hay bales or carry calves.

As a healer, she's opposed to violence and killing, but she's not afraid of wielding a gun, either. She'll also rush to save the person's life afterward.

Octavia has served on the front lines of war for years. She's not about to be coddled by the men at home who think a woman shouldn't even cross a street by herself. The Clockwork Dagger series is steampunk fantasy, combining Victorian and Edwardian expectations, clothes, and technology in a different world. Manners and propriety are of great importance, but that doesn't mean Octavia is weak or simpering. She'll tell a man what's-what without the need for any profanity. Sometimes, a glare says plenty on its own.

Most of all, Octavia is strong through her compassion. She cares. For her, healing people isn't simply a job but a calling. Her magical powers are drawn from a mysterious world tree known as the Lady, and Octavia's skills are unlike any seen before. As The Clockwork Crown begins, her magic has changed in new and disturbing ways.

All Octavia really wants is for the war to end, and to be able to settle down in a quiet village and tend to people. Instead, her powers have attracted assassins and kidnappers. She's on the run for her life. She's terrified, but she's secure in her faith. Octavia has a strong will to survive because she cares about people, and in turn, they care for her. She doesn't simply want to save herself; she wants to save everyone. To me, that's the greatest sort of strength. 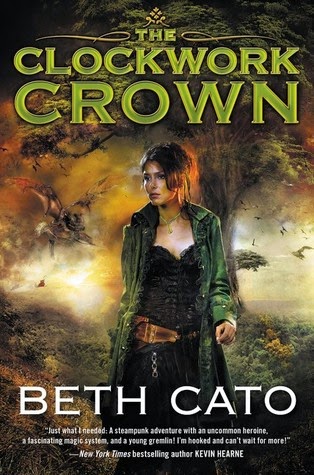 
Rich in atmosphere, imagination, and fun, the action-packed, magic-filled sequel to The Clockwork Dagger is an enchanting steampunk fantasy, evocative of the works of Trudi Canavan and Gail Carriger

Narrowly surviving assassination and capture, Octavia Leander, a powerful magical healer, is on the run with handsome Alonzo Garrett, the Clockwork Dagger who forfeited his career with the Queen’s secret society of spies and killers—and possibly his life—to save her. Now, they are on a dangerous quest to find safety and answers: Why is Octavia so powerful? Why does she seem to be undergoing a transformation unlike any witnessed for hundreds of years?

The truth may rest with the source of her mysterious healing power—the Lady’s Tree. But the tree lies somewhere in a rough, inhospitable territory known as the Waste. Eons ago, this land was made barren and uninhabitable by an evil spell, until a few hardy souls dared to return over the last century. For years, the Waste has waged a bloody battle against the royal court to win its independence—and they need Octavia’s powers to succeed.

Joined by unlikely allies, including a menagerie of gremlin companions, she must evade killers and Clockwork Daggers on a dangerous journey through a world on the brink of deadly civil war.

Beth Cato hails from Hanford, California, but currently writes and bakes cookies in a lair west of Phoenix, Arizona. She shares the household with a hockey-loving husband, a numbers-obsessed son, and a cat the size of a canned ham.

She’s the author of THE CLOCKWORK DAGGER steampunk fantasy series from Harper Voyager. The newest book, THE CLOCKWORK CROWN, comes out on June 9th, 2015.