Review & Giveaway: Sixth Grave on the Edge by Darynda Jones 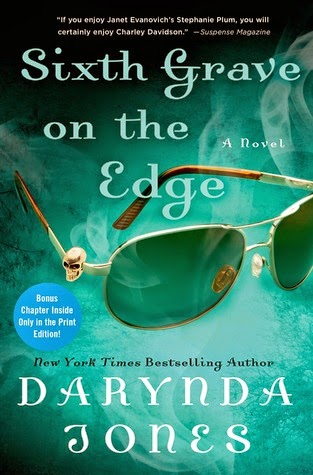 Few things in life can come between a grim reaper and her coffee, but the sexy, sultry son of Satan is one of them. Now that Reyes Farrow has asked for her hand, Charley Davidson feels it's time to learn more about his past, but Reyes is reluctant to open up. When the official FBI file of his childhood abduction lands in her lap, Charley decides to go behind her mysterious beau’s back and conduct her own investigation. Because what could go wrong?

Unfortunately, another case has fallen into her lap—one with dangerous implications. Some very insistent men want Charley to hunt down a witness who is scheduled to testify against their boss, a major player in the local crime syndicate. If Charley doesn't come up with an address in 48 hours, the people closest to her will start to disappear.

Add to that a desperate man in search of the soul he lost in a card game, a dogged mother determined to find the ghost of her son, and a beautiful, young Deaf boy haunted by his new ability to see the departed as clearly as he sees the living, and Charley has her hands full. The fact that Reyes has caught on to her latest venture only adds fuel to the inferno that he is. Good thing for Charley she's used to multi-tasking and always up for a challenge…especially when that challenge comes in the form of Reyes Farrow.

Dun Dun Duuuuun. THEIR BACK! Every Charley Davidson book has left me with a book hangover and SIXTH GRAVE ON THE EDGE is no different. I couldn't pick up a book for a good 24 hours (which by now you know is very weird for me) and even now, over a month after I read book 6, I'm still thinking about it and waiting to get my hands on book 7.

I just love Charley's mouth! OK that sounded dirty, I shall rephrase. I love the way she thinks and her way with words. She is beyond hilarious and I wish I had a friend like her. The humor in this series is off the chart and it is always done so darn well. I love learning more about Charley, Reyes and the other characters as the series goes along. I am never left un-surprised (is that even a word?) about the bombs that are dropped. And I must say (even though you will have NO clue until you read the book). The missing wall moment was HILARIOUS. Ahh that Reyes. He is something else.

That ending *eyes bugging out of my head* WHY must you drop that news and end it? I will go crazy until I get my hands on SEVENTH GRAVE AND NO BODY. I only have a few slight issues with SIXTH GRAVE, 1: There were some pretty big questions and plot happenings raised that we never got answers to and 2: the massive cliffhanger ending.

Haven't started the series yet? I feel bad for you, you are SO missing out. 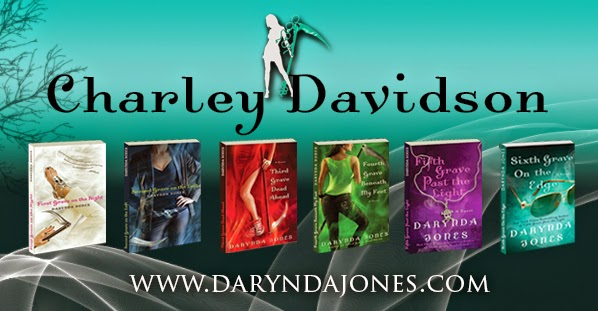 NYTimes and USA Today Bestselling Author Darynda Jones has won numerous awards for her work, including a prestigious Golden Heart®, a Rebecca, two Hold Medallions, a RITA ®, and a Daphne du Maurier, and she has received stellar reviews from dozens of publications including starred reviews from Publisher’s Weekly, Booklist, and the Library Journal. As a born storyteller, Darynda grew up spinning tales of dashing damsels and heroes in distress for any unfortunate soul who happened by, annoying man and beast alike, and she is ever so grateful for the opportunity to carry on that tradition. She currently has two series with St. Martin’s Press: The Charley Davidson Series and the Darklight Trilogy. She lives in the Land of Enchantment, also known as New Mexico, with her husband of almost 30 years and two beautiful sons, the Mighty, Mighty Jones Boys. She can be found at www.daryndajones.com.