UFI welcomes Evie Manieri Author of Blood's Pride. Thanks for Joining us!!


I’m short, but I usually wear clogs or boots with big, chunky heels, so people often give me credit for being taller than I am. In truth, I have never seen a parade or concert stage without a milk crate to stand on – except once in the late 90’s, when I managed to get right in front of the stage to see Pulp, and my ears rang for three days afterwards. It was worth it to have Jarvis Cocker perspire on me as he pulled Common People out from the depths of his cynical soul.


There are moments when I find connections between different threads or characters that I hadn’t consciously put there, and that’s always a thrill. Moments like that are what make a world feel real and engaging to me, as a writer and as a reader: the sense that everything and everyone is connected.


No, not really. I have a bit more dedicated writing time now, but with BLOOD’S PRIDE, I had to snatch whatever time and space I could. It was challenging, but it made me very adaptable.


I’ve only just branched out into reading Urban Fantasy recently, but I’ve enjoyed books by Chuck Wendig, Tom Pollock and Nick Harkaway. I’m just getting in to Daniel O’Malley’s The Rook, which is off to an intriguing start.

How would you explain Blood’s Pride to someone who has never heard of it before?


BLOOD’S PRIDE is the story of an epic rebellion, but one in which the action takes place on a very personal level – or, as I often think of it, a fantasy novel as told by an unabashed shipper. It’s about the indigenous Shadari people rising up against their Norlander oppressors, but the real story is that of people tangled up in a complex web of assumed loyalties, forbidden desires, secrets, tragedies, betrayals, and hopes.


What can you tell me about the world that Blood’s Pride is set in?


The physical setting was inspired by some traveling I did a while ago in Greece, Turkey, and Spain. There was an arid starkness to those glaring seaside landscapes that fit the story I wanted to tell. That said, this is not a historical setting, and the races that inhabit it are not human. The invading Norlanders come from a frozen wasteland: they are tall and gaunt with pale, translucent skin, blue blood, superior fighting and healing abilities, and communicate with a form of telepathy – but they are hyper-sensitive to the Shadari sun, and have to keep covered in the daylight. They ride giant, bat-like creatures – called triffons –that are instrumental in maintaining control over the indigenous Shadari. The Shadari more closely resemble humans, but when the Norlanders invade in the book’s prologue, the priests with the telekinetic powers they rely on to protect them leap off the temple roof to their deaths. In the intervening twenty years of occupation, the Shadari society has not recovered from their loss.

Do you have a favorite scene in Blood’s Pride?


I do, but it’s very difficult to talk about without spoilers! Chapter 24, which is near the half-way point, is probably my favorite scene. It’s a significant turning point in the lives of several of the protagonists – Isa, most notably – and one in which there are key emotional revelations.


I really like them all, but my favorite to write about (though not the easiest, by any means) is Isa. She’s such a unique soul, and she has a thrilling impulsiveness that’s different from many of the other characters. She’s always the one who surprises me. The most difficult is probably Harotha. Even though she’s smart and effective, she’s also driven and stubborn, and she has a lot of trouble connecting to the people around her. It’s hard to watch her push people away, but that’s just who she is.


I’m currently working on the second book in the Shattered Kingdoms series, FORTUNE’S BLIGHT. Once that’s done, I’ll have the third book, STRIFE’S BANE to keep me busy. After that, I’ll just see where inspiration takes me! 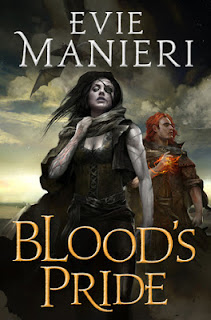 Rising from their sea-torn ships like vengeful, pale phantoms, the Norlanders laid waste to the Shadar under cover of darkness. They forced the once-peaceful fisher folk into slavery and forged an alliance with their former trading partners, the desert-dwelling Nomas tribe, cutting off any hope of salvation.

Now, two decades after the invasion, a rebellion gathers strength in the dark corridors of the city. A small faction of Shadari have hired the Mongrel, an infamous mercenary, to aid their fledgling uprising—but with her own shadowy ties to the region, she is a frighteningly volatile ally. Has she really come to lead a revolution, or for a more sinister purpose all her own?