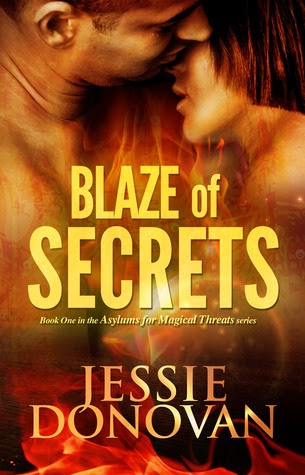 
To avoid persecution, the Feiru will do anything to keep their elemental magic a secret from humans—even lock away their children for life. Few know about the experiments going on inside the prison system for magic users, but that is about to change…

Kiarra Melini overhears the dangerous secrets of her blood and decides that if Feiru elemental magic is to survive, she needs to die. But before she can finish the deed, a handsome black-clad man kidnaps her from prison and introduces her to an anti-prison activist group. As the prison retrieval squad hunts for her, Kiarra must overcome the demons of her past or risk losing not only her newfound freedom, but also the man who reawakens her desires and captures her heart.

Jaxton Ward finally rescues his older brother from prison, but instead of helping with his brother’s recovery, he’s ordered to train Kiarra—a stubborn elemental fire user who claims her magic is gone. But just as Kiarra starts trusting him with her secrets, the prison enforcers catch up with them. Now Jaxton must find a way to keep his family safe while also protecting the only woman able to ignite both his temper and his passion.


Kiarra has spent most of her life locked away in a prison for the Feiru. She has been experimented on, beaten, and now someone is breaking into her cell and she has no clue why someone would want to kidnap her. Jaxton finds the means to rescue his brother from Prison but the condition is that he also needs to rescue a girl that is also in prison there. When he gets her back to his base of operation he is ordered to train her and quickly finds out why she is so important.

I am a big fan of books where the characters have elemental powers. I don't know why but they usually end up being pretty exciting. The fact that Kiarra's powers are a little more special makes her character a bit more exciting. I liked Jaxton right away. He quickly started caring about Kiarra and although he could be a bit brutish at times I understood him.

I enjoyed BLAZE OF SECRETS. It is one of those books that takes you by surprise when it pulls you in but when it's over you don't have a whole lot to say about it. It just is/was. The characters were likable, the world is on the way to being nicely developed and overall the series is off to a good start. Kiarra's sister will be the star of book 2 and I look forward to reading.