Promo & Giveaway: The Danger of Destiny by Leigh Evans 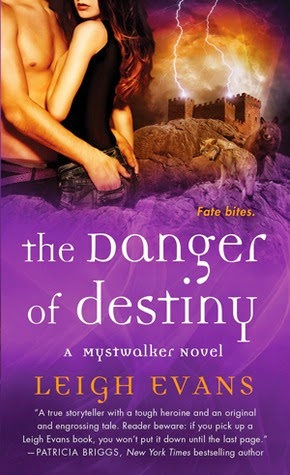 
WHY WHISTLE IN THE DARK…

There are very few days off when you’re on an epic quest. Believe me, I know. I’m Hedi Peacock—one half Fae, the other Were—and if being a half-breed with one foot in each world isn’t tough enough to manage, there are the four chambers of my heart to consider. The one who holds the strings? Robson Trowbridge, the Alpha of Creemore. If I had my way, he and I would be locked in a bedroom, for eternity, but a pressing family matter needs my attention. It’s true what they say: A woman’s work is never done.

WHEN YOU CAN HOWL AT THE MOON?

My twin brother is being held captive by the Old Mage in another realm. Lo and behold, as soon as Trowbridge and I arrive in Merenwyn, we’re separated in spectacular, dramatic fashion—and I’m left to figure out how to maintain the fragile balance between my Fae magic and my wolf’s blood in a realm that cries to both. Not easy, particularly when I'm keeping an iron-grip on my temper so as not to dispatch with extreme prejudice the odd wizard or smart-mouthed mutt servant who crosses my path. My mama never told me there’d be days like these, but I’m not going down without a fight…or my mate.

You would think that the two of us would have had some sort of discussion about the Raha’ells before this. But we hadn’t. Our landing in this realm had been abrupt and on the heels of near disaster. Since then, we’d been on the move and it hadn’t come up.

Okay, I’ll own to not being terribly keen about opening a topic that touched on the fact that I had sent my lover to Merenwyn for nine numbing years. A lesser man wouldn’t have survived exile to a realm that hunts wolves. However, my Trowbridge had thrived, discovering unsuspected leadership qualities as the Alpha of the Raha’ells. Under his tutelage, the dissident pack’s guerilla warfare tactics had sharpened and their war on the ruling Fae had evolved from a fringe irritation to a real threat.

It was a given that Trowbridge would rise to the top of the Fae’s wanted list. Eventually, he was captured and brought to the Spectacle grounds, a prison within the Fae castle that serves as a theater of death for those with wolf blood. Executions are scheduled for full moons and well attended by the Fae. After all, it’s a fi ne spectacle for those in the stands— gladiator games played without any weapons. Death was inevitable for a wolf; the only thing left to chance and self- will was the length of time it took to die. I’ll be forever grateful that Lexi kidnapped Trowbridge and led him out of those killing grounds.

But it had looked bad.

It had appeared that the Son of Lukynae had turned his back on his people.

Trowbridge squeezed my arms, then stood.

“What will happen if we run into them?” I asked. Would the Raha’ells tear him apart limb by limb? Feast on his internal organs? Use his head to play soccer?

Goddess, my imagination is too vivid.

For a long time, he said nothing. “A cowardly Alpha who turned his back on his people— there’s no coming back from that. They’d go to town on me and they’d have every
right to do it.”

“You’re not a coward. You were under Lexi’s compulsion spell. You would never have—”

“Left some of my pack to die at the Spectacle? Walked right out of that hellhole with my pack’s worst enemy? That’s what I did. Doesn’t really matter why I did it.”

Note to self: see a Raha’ell, run like hell. “What are our chances of encountering them?”

“I know their hunting grounds. I know which trails they take, and where they choose to camp down for the night. We’ve stayed clear of those areas and the wind’s been in our favor. As long as we stick close to the river, we should be all right.”

I hate the word “should.”

“I doubt we have anything to worry about,” I heard him say.

Not a fan of the word “doubt” either.

He walked away, turning his back to me to meditate on the land behind us. We’d been following the edge of what had to be a very long escarpment. Behind us were mountains. Big ones. A long range of the type that adventure seekers flock to. Take Everest, K2, Mount Ranier, and Mont Blanc and throw in some of their craggy cousins.

“What are you thinking?” I asked, hoping it didn’t involve
scaling K2.

He turned back to study me. Rubbing a hand over his bristled hair, he shook his head at my jersey- wrapped feet. “Jesus, I wish we had shoes for you.”

“You’re not wearing any.”

“Used to this place.”

“I was going to say that my feet are like leather.” He walked back to me and sank into another squat. Two large, warm paws reached to cup my jaw again. Blue eyes surveyed mine. I read approval and respect. Love and worry. “We’ll take a rest here.” My mouth opened to issue the usual lie about being “perfectly all right,” and he said, “We both need it, sweetheart.”

“I can take whatever’s coming, Trowbridge,” I said, and found, to my surprise, that I meant it.

His expression grew tender and he shook his head.

“When are you going to stop calling me Trowbridge?”

“The day I find a better name for you.”

He grinned, and he was Robbie Trowbridge again. The guy who played a guitar and had long hair, instead of this buzz cut that I couldn’t reconcile myself to. I studied him, taking in the gaunt beauty of his face. Then I finally said what I should have said several hours ago. “Thank you for following me back to this realm, mate.”

His thumb stroked my bottom lip.

My tense smile softened into my Lolita come- hither. My lids lowered and my mouth parted, ready for his kiss. But instead of lips that could be either hard or warm, I felt the intrusion of a stick of wood that tasted like Trowbridge and bitter bark sliding into my mouth.

I opened my eyes.

LEIGH EVANS was born in Montreal, Quebec but now lives in Southern Ontario with her husband. She's raised two kids, mothered three dogs, and herded a few cats. Other than that, her life was fairly routine until she hit the age of 50. Some women get tattoos. Leigh decided to write a book about a half-Fae, half-Were girl who's a magnet for trouble. At the age most people start thinking about retirement, Leigh is slinging words and pummeling plots. Leigh's destiny has finally been met: she's a writer.