UFI welcomes Marie Treanor Author of The Blood Hunters Series. Thanks for Joining us!!


My “Blood” World by Marie Treanor

Hi there! What a great place to start off my tour with the Blood Hunters series– thanks for having me back at UFI :).

Maybe because three always seems a bit of a magic number, the release of the third Blood Hunters book, BLOOD DESCENT feels like a milestone in the continuing tale.  Plus a few major story arcs reach a conclusion in this book. If you don’t know, the roots of this series lie in the earlier Awakened by Blood trilogy, which tells the story of the rise and rise of the Ancient vampire Saloman and his intense relationship with his accidental awakener, Elizabeth Silk. Although you don’t have to have read the earlier series to come to grips with this one, Blood Hunters does carry on where the final Awakened book, BLOOD ETERNAL left off; but it focuses on Elizabeth’s friends the vampire hunters.

So, BLOOD DESCENT is the sixth book set in this world! And it’s got me thinking about how things have changed there since Elizabeth first stumbled into it in BLOOD ON SILK. My vampires then were old style bad ass blood drinkers – ruthless, murderous, powerful, callous and impenetrably alien to decent humans. Saloman was the same, only - being so much older and stronger, the last of the pure blooded Ancient race - more so!

Is Saloman still like that? Are the “lesser” vampires? Well, yes J. But they have developed, both in themselves and in the perception of the human characters, so they’re not quite so incomprehensible.

Saloman is now undisputed ruler of the vampire world and has made some impact in human affairs too through wealth and political connections. There’s no let up to his ambition and he still wouldn’t bat an eyelid at killing anyone in his way. But under Elizabeth’s influence he’s chosen a softer route, using alliance rather than terror. And the rest of the undead are forced to take their lead from him. As a result, vampire murders are rare now, and in return the hunter organization has also changed. They don’t automatically kill vampires anymore; they’ve become more of a special police force.

Doesn’t mean vampires and hunters trust each other now - they don’t! Especially as vampires see no need to hide in the shadows and rumours of their existence continue to spread across the world. Everything’s about to change as a reputable television journalist begins to investigate the undead.

The uneasy peace also threatens to blow up around the “miracle” birth of Saloman’s daughter who’s prophesied to unite the two races. Some humans and vampires fear this birth as an intolerable increase in Saloman’s already excessive power, and both sets of opponents, vampire and human, threaten the child’s life.

Then, since Elizabeth first encountered Saloman, the hunters  have become aware that vampires actually have feelings, perhaps even stronger ones than humans, although they may not always be recognizable. However, this makes no difference whatsoever to the troubled Konrad, hero of BLOOD DESCENT, who’s left the hunters’ network in order to fight vampires on his own terms and bring down Saloman for good. He’s collected a following of renegade hunters to help. But before the end of the story, he’s forced to recognize that one vampiress at least behaves with more humanity than he does…

What do you think? Is there a place for humanity in vampires? :)

Award winning author Marie Treanor lives in Scotland with her eccentric husband and three much-too-smart children. Having grown bored with city life, she resides these days in a picturesque village by the sea where she is lucky enough to enjoy herself avoiding housework and writing sensual stories of paranormal romance and fantasy. 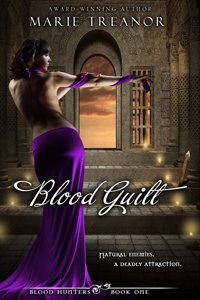 Mihaela, a fearless vampire hunter secretly haunted by loneliness and childhood tragedy, finds it difficult to adjust to the new world order where vampires are not always the bad guys. She's taking a much needed vacation in Scotland when she sees a little boy being chased through the streets of Edinburgh. Rescuing him brings bigger problems - two vampires from her past: Gavril, who killed her family; and the reclusive and troubled Maximilian, gifted Renaissance artist and one-time overlord of the most powerful undead community in the world. Maximilian once saved her life and now needs that favor returned.

The earth moves for Mihaela in more ways than one. From Scotland to Budapest and Malta, she races against time to prevent a disastrous, vampire-induced earthquake and save an innocent yet powerful child – all while fighting a dreadful attraction to Maximilian, her only ally, whom she can’t afford to trust. For Maximilian, the hunter becomes a symbol of renewed existence, as he struggles to accept his past and rediscovers his appetite for blood and sex - and maybe even happiness. 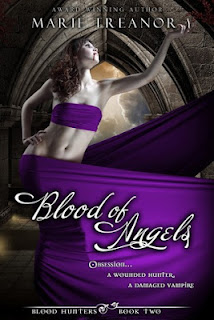 Six months ago, vampire hunter and inventive genius Istvan nearly died in the seminal battle that would change the relationship between humans and vampires forever.

A year before that, he first encountered sexy vampiress, Angyalka, owner of the Angel Club, favored haunt of the undead. Istvan won that round, but when he recklessly seeks her out again in search of the secret of angels, he's alone and so exhausted he can barely stand, let alone fight vampires. Plus Angyalka's out for revenge, and very happy to use his powerful sexual attraction to her…

But Angyalka has her own secret weaknesses as well as terrifying strengths even she doesn't understand. Their battle becomes one of wits and sex, but when someone bombs the club, they fight together to contain all the threats closing in on the Angel, from humans and vampires, including the sadistic killer who could just be dangerous enough to finally topple undead overlord Saloman.

As Istvan struggles to harness the mysterious power of angels, Angyalka needs a deeper strength to send away the fascinating hunter who delivers on all her deepest sensual desires and yet can't come to terms with her vampire nature. 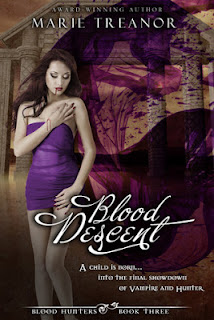 
A child is born...into the final showdown of Vampire and Hunter

The face of a killer, the heart of a lost child… Konrad once led the legendary first team of Hungarian vampire hunters. Now, refusing to ally with the undead, he goes his own way, slaughtering vampires across the length and breadth of Europe.

The dying thoughts of one such vampire send Konrad to Britain in search of a dangerous instrument that might be just what he needs in his obsessive war with undead overlord Saloman – a war he’s determined to win at any cost. The only being who can lead him to the instrument and its current, evil possessor, is sexy, mysterious, young Glaswegian vampire Maggie, who holds herself aloof from her own kind.

Maggie sees much more than Konrad’s anger and cruelty. She makes it her mission to reach beyond the horrors of his past and find the man he should have been. Difficult, when he threatens her heart as well as everything she believes in; and when her whole being clamors for his body and his blood.

While journalists circle, about to break the news of vampire existence on mainstream television, Elizabeth Silk labors to give birth to Saloman’s daughter, and Maggie plays a dangerous game that risks everyone for her belief in one troubled man.