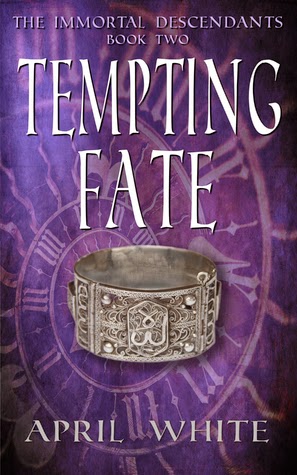 
Seventeen-year-old Clocker, Saira Elian is back on the run and being hunted by Mongers. The Descendants of War are amassing power in the 21st century, bent on controlling all the Immortal Descendants. Their attempt to kidnap Saira, a rare Descendant of Time and Nature, reveals just how brazen they’ve become. Archer, the vampire who has loved Saira for over a century, is willing to risk everything to protect her.

When a horrific vision reveals Ringo, thief and loyal companion from 1888, being tortured at the hands of the bloodthirsty Bishop Wilder in a Renaissance prison, Saira and Archer realize there has been a ripple in the river of Time, and they must travel to 1554 to find its source and save their friend. Their rescue mission lures them to the Tower of London, site of the most notorious executions in history, where they encounter the mysterious Lady Elizabeth who is confronting a terrible fate of her own.

The time-traveler, the vampire, and the thief will need all of their skills and ingenuity as they race against time to steal a document that could change the course of history and put the Immortal Descendants at the mercy of the Mongers. Can they stop a madman bent on collecting the blood of history’s most powerful Seer before the executioner’s axe falls?


I love this series, LOVE it. The characters, the time travel (which I usually don't like), the storyline... It just rocks! It has been a long wait but TEMPTING FATE was so worth it.

It doesn't take long for the action to start. In fact the books open up with Saira running through the woods from danger, getting your heart pumping with a nice pace and the pace doesn't slow down until the book is over. The blurb does a really fantastic job of explaining what book 2 was about. I really loved that all of our favorite characters are involved at some point. Ringo is a pretty important part of the group and I couldn't imagine him not being involved. The world building that goes into a series like this is pretty extensive and April does such a good job of making it easy to understand. I had no problem picturing myself in the book at any point. So much happens in TEMPTING FATE and I don't want to give anything away, but know that no one is left unchanged in some way by the end.

The relationship between Saira and Archer isn't easy. Archer has loved Saira for a really long time while Saira has only loved him for a short amount compared. Archer gives Saira her space to figure things out but it takes something drastic for her to finally realize she can't live without him and even after that she has to find a way to let him into her life and stop doing everything on her own. Their relationship is pretty strong by the end of TEMPTING FATE and I admit it is one of my favorite parts of the series.

All that I wanted when TEMPTING FATE ended was to read more. April PLEASE don't make us wait as long as we did for book 2, I need more.