Review: The Bane by Keary Taylor 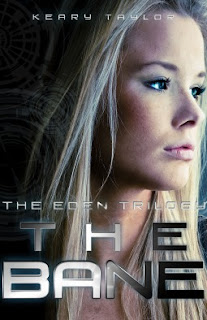 Before the Evolution there was TorBane: technology that infused human DNA with cybernetic matter. It had the ability to grow new organs and limbs, to heal the world. Until it evolved out of control and spread like the common cold. The machine took over, the soul vanished, and the Bane were born. The Bane won't stop until every last person has been infected. With less than two percent of the human population left, mankind is on the brink of extinction.

Eve knows the stories of the Evolution, the time before she wandered into the colony of Eden, unable to recall anything but her name. But she doesn't need memories to know this world is her reality. This is a world that is quickly losing its humanity, one Bane at a time.

Fighting to keep one of the last remaining human colonies alive, Eve finds herself torn between her dedication to the colony, and the discovery of love. There is Avian and West – one a soldier, one a keeper of secrets. And in the end, Eve will make a choice that will change the future of mankind.


The world that The Eve Trilogy takes place in was easy to follow and understand. Humans are on the brink of extinction and the colony goes day-to-day trying to survive.Eve has no memories from before she arrived at the colony and she knows she is different from the other humans, she just didn't know how different she really was.

THE BANE follows Eve's story. She is faster, stronger and heals quicker then everyone else. She is one of the protectors of the colony and goes on supply runs to help keep them alive. She was a really neat character to get to know and left me wanting to know even more about her at every turn. I liked how everything ran in the colony and how they were all like family. Eve starts out the book not having any emotions but slowly gains them with each chapter. There is a bit of a love triangle going on. One one side we have Avian, the colony's "doctor". Although he is older than Eve, he has always been there for her and when West arrives finally starts showing Eve how much he cares. On the other side is West. He's mysterious, dangerous, and has a past he doesn't really talk about but Eve is drawn to him all the same. I was surprised with her final choice but it was a pleasant surprise and the right choice for her.

THE BANE was well written with a unique storyline and a great cast of characters. The ending of THE BANE could have been the end of the story but I'm glad that I will get to witness more from the great world that Taylor has created with 2 more books.