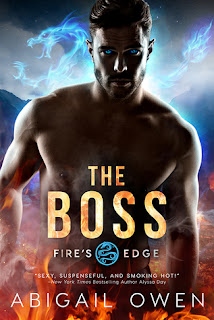 Finn Conleth leads his team of enforcer dragon shifters with an iron fist and a cold heart. Every dragon seeks his destined mate, but the process to turn the woman he once thought was his killed her and devastated him. He will never risk his heart again. His team is his family now. When his body eventually gives out, he’ll leave, living his last days alone.

Delaney Hamilton moved across the country to escape the freak fires that plague her. But when another suspicious fire erupts and rapidly escalates around her, her hopes for a new life go up in smoke. She has no choice but to turn to the mysterious men who come to her aid.

Finn knows the fire is dragon-caused, which puts Delaney’s problems directly in his jurisdiction. No matter how her wounded grey eyes call to every part of him, he refuses to risk her life in the mating process.

Until another dragon threatens to claim Delaney for his own, and Finn has to sacrifice everything to keep her alive...


With plenty of action and a nice pace, THE BOSS was a pleasant read.

A few things stuck out to me when I was done reading THE BOSS. I really enjoyed the authors take on the dragon shifters. I really enjoyed the job they perform and the way they work together. There was plenty of action in THE BOSS between the firefights and fighting the bad guys. The secondary characters brought a lot to the table and I want to know more about them.

A few things I didn't love. We were kinda thrown into things without a whole lot of background given. I would have liked to know more about the dragons and even Delaney. The romance between Delaney and Finn started off pretty fast, but I didn't necessarily FEEL their connection as fiercely as it was explained.

I would read more in this world and I wouldn't mind seeing the other dragons find their mates.