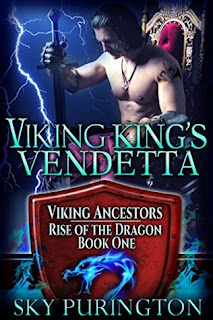 
Taking a few months to reflect on what she truly wants from life, Emily returns to her family home in Winter Harbor, Maine. Yet she should have known her ties with ancient Scandinavia and those with dragon blood would catch up with her. Moreover, that her connection with the man she loves would be impossible to ignore. Something soon proved when he pulls her back in time to tenth century Norway.

Determined to help his people defeat a dark prophecy, Viking Sven Sigdir returns to his homeland to find two regions minus their beloved kings. Leaderless, both clans look to Sven to rule. Though willing to rise up, he must first uncover the root of the prophecy. That means reuniting with the woman who holds his heart and setting forth on a perilous journey.

Sven and Emily navigate not only their feelings for one another but the burgeoning prophecy that might take it all away. Will they be able to conquer their new adversary before it’s too late? Or is this just the beginning of something that will change life as they know it? Join them as they embark on their adventure in a new action-packed series ripe with sizzling passion, epic battles, and unforgettable characters.

Arms crossed over her chest, Emily turned on Sven. “So what’s going on? What am I missing?”
He started to talk then stopped. Then he started again before stopping again. She was about to coax him along with some select words, but he finally came out with the last thing she expected. And when he did, his voice wasn’t quite right.
“Did your mother ever talk to you about going into heat?”
Oh. Odin. Help. Her.
“Enough said,” she managed before she strode after the others, her cheeks on fire. Of course, her mother had talked to her about that. It meant her inner dragon was ovulating for the first time. Something that happened long after her human half did.
Damn it, what crappy timing.
This meant not only would she attract non-related dragons from miles away but be in full-fledge lust herself anytime now. When that happened, her inner beast would seek out the male dragon that appealed to her most and have sex with him. And she had no doubt whatsoever who that would be.
Meanwhile, she was getting ready to walk into a lair full of non-related male dragons.
As if they didn’t have enough problems already.
“Gods, why now?” she muttered, shaking her head. She could already hear Bodhrán drums pounding in the Ancient’s Lair they were so close. She could smell the unique smoky scent of far too many virile male dragons in one place.
“It will be all right,” Sven assured, catching up with her. “If you have any questions—”
“Sven!” she interrupted him. “I don’t have any questions, and if I did, you’d be the last one I’d ask.”
“Why?”
“Because…I don’t know.” She shook her head, not looking at him. “It’s not something I want to talk to you about at all.”
In some ways, a dragon going into heat for the first time was as daunting as a girl getting her menstrual cycle for the first time. You were told what to expect, but it was still all so strange and life-changing. In that female dragons typically did it in their twenties made it that much more bizarre.
“I’ll stay by your side when we arrive at the Ancient’s Lair,” he assured, clearly bracing himself for impact based on his furrowed brows and downturned lips. “You’re already alluring but this…” He shook his head, obviously set to go to battle if need be. “No one will touch you that you don’t want touching you.”
She stopped short at that, surprised. “You mean to say you’d let another male dragon lay with me if that’s what I wished?”
If his jaw got any tighter, it might just snap off. Yet, he said what she needed to hear.
“Yes.” He managed a jerky nod even as his dragon eyes flared in defiance. “We are friends, and I support you in all things. Even this.” His voice grew more strained. “You are a grown woman and a mature dragon. You should be able to make your own decisions. Especially about something so important.”
Funny, she knew he was saying what she wanted to hear, but hell if it didn’t irk her. “You do realize male dragons can’t control pregnancy when female dragons are in heat?”
“I am aware,” he said, his voice low and gravelly now. He was deeply distressed by the conversation but hanging in there. “I’m also aware that your behavior will change while in heat. You will grow more…aggressive.”
“I’m aware.” She arched a brow. “Are you ready for that?”
“I have little choice.” He went to take her hand but stopped, likely fearing a repeat of before. “Like it has always been between us, I will stand by your side and keep you safe. Not as a controlling friend but as one who understands this might be a difficult period of adjustment for you and you may need advice.”
Appreciative, she eyed him for another moment before she nodded thanks and they kept moving along. The truth was she was in uncharted waters and couldn’t be more grateful he was here. Sure, it could get a bit tricky when she got all super lusty, but she knew Sven would keep her at arm’s length. He understood the boundaries she had set until she was ready.
Yet as they continued on and she kept a discreet eye on his tattoo, she found herself more often looking at the muscular definition of his strong arms. At the width of his broad shoulders. Then her eyes would wander down his cut body, and she’d find herself wishing he wasn’t wearing that sleeveless tunic. Then they’d go lower, and she realized she could do without the leather pants too.
Then her thoughts would go even further.
How strong a dragon he was. How big and beautiful he became.
She bit her lower lip hard and kept forcing herself to look ahead, well aware that it was beginning. That her thoughts were becoming far more erotic and at an alarming rate. More so, she realized that this all might be more than she was ready for when they arrived at the entrance to the massive tavern at the heart of the Ancient’s Lair. When far more male dragons than she anticipated looked her way.