Interview + Giveaway: Children of the Veil by Colleen Halverson

UFI welcomes Author Colleen Halverson. Thanks for Joining us!!

One thing I don’t talk about a lot is that I have synesthesia, specifically auditory-tactile synesthesia which means I feel sound. Depending on the type of music it can feel like a wave or a tingling sensation. Listening to YoYo Ma’s Bach concertos is like a full body massage. It’s very cool. I had never heard the term until a professor of mine used it to describe Emily Dickenson, and I sat there in class saying, “But that never happens to you? To any of you? Where you feel music?” They all looked at me like I was crazy. I just figured that was normal.

I like to run and take walks, and I also do martial arts. For a writer, I also watch an obscene amount of television.

I love drafting the most. Every new story feels like a brand new adventure for me.

Check Facebook, check Twitter…honestly, not really. But when I do get down to business, I require a nice cup of Earl Grey to get me started.

I love JR Ward and her Black Dagger Brotherhood series. If I ever met her, I would probably fangirl like a raving idiot. I also love KM Moning’s Fever series. Those books really inspired me to tap into my knowledge of Irish folklore and mythology to write my own novels.

How would you pitch The Aisling Chronicles to someone who has not heard of it before?

It’s about a young woman named Elizabeth Tanner who discovers she is half-Fae and must learn to wield and control her powers in order to take down the patriarchy, I mean, the secret, magical government trying to use her for political gain.

Can you tell us a little bit about the world that The Aisling Chronicles is set in?

In the world of The Aisling Chronicles, there exists a secret government that controls the three magical races of Ireland: the Fae, the Druids, and the Fianna (a kind of warrior class). Half of the novels take place in our mortal world, but Elizabeth and Finn also travel into Tír na nÓg, aka the Faerie realm.

Do you have a favorite scene in CHILDREN OF THE VEIL?

I have so many favorite parts, but I think the part I love the best is when Elizabeth and Finn, her Fianna warrior alpha hottie, go to the underground Faerie court in London. It’s a raucous, wild place and through a series of unfortunate events, Finn has to fight this horrible cyclops for Elizabeth’s honor. I’m not usually one for the damsels in distress, ahhhhh!!! But it sure is cool to see Finn do his thing, which is fight and be a total warrior badass. I’ve probably read that scene a hundred times, but my shoulders still tense up each time.

My favorite character to write is Malachy Moray. He’s a dearg-dubh, which in my world is like a Fae Irish vampire, and he’s sort of like David Tennant meets Tyrion Lannister kind of character. It’s funny because originally I had wanted to make him this dark, sort of Angel-like vampire villain, but he wasn’t having it at all. He’s very, very silly.

The hardest character to write is probably my main character, Elizabeth. But hard in a good way! Elizabeth challenges me because she takes me to some deeply complex and emotional places at times. I need to paint her with a very fine brush and some of these scenes required a lot of close reading and editing to strike the right notes with her, especially those scenes with Finn.

As a child, Colleen Halverson used to play in the woods imagining worlds and telling stories to herself. Growing up on military bases, she found solace in her local library and later decided to make a living sharing the wonders of literature to poor, unsuspecting college freshmen. After backpacking through Ireland and singing in a traditional Irish music band, she earned a PhD in English with a specialization in Irish literature. When she’s not making up stories or teaching, she can be found hiking the rolling hills of the Driftless area of Wisconsin with her husband and two children.

CHILDREN OF THE VEIL is the follow up to her debut urban fantasy novel, THROUGH THE VEIL. 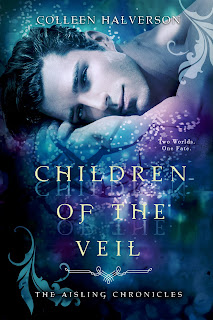 
Elizabeth Tanner has one goal: to find her mother in whatever dimension she’s imprisoned. But to do that, she has to face her estranged father, and to do that, she needs a shot of whiskey…or seven. But after an attempt on her life and the return of her lost love, she wakes up with one hell of a hangover and a whole barrage of questions.

Finn O’Connell doesn’t know why the Fianna want him to aid Elizabeth in her search, but he’ll take any excuse to be near her again. Together, they dive headlong into the shadows of her mother’s secrets and find themselves embroiled in a Fae rebellion that will test Finn’s loyalties and their love.

With the Faerie realm verging on chaos, Elizabeth and Finn will embark on a quest that will lead them from the streets of Chicago to London’s seedy Fae underground. But rescuing Elizabeth’s mother means journeying to a place Finn can’t follow, and Elizabeth is forced to make a choice between finding her at last or saving her own soul.


My legs buckled and he snatched me into his arms, my head lolling against his chest. I breathed in the smell of leather, fresh folded laundry, and that pure, manly scent of Finn-ness. God, I had missed him. “Who…?” I managed to say, the words feeling like caked mud in my mouth. He didn’t answer, but slipped me into his car and I sank into the leather seat, darkness eating at the edge of my sight. The purring engine lulled me into a daze, and I must have passed out because the next thing I knew, we were stumbling up the stairs to my apartment. “I live here,” I slurred. “I know,” Finn mumbled, his muscled arm propping me up. “Where are your keys?” Snowflakes collected on the crown of his head, his eyebrows knitting together. The curve of his mouth filled my vision, and my fingers slipped over the soft skin, tracing the delicate cupid bow on his top lip. His face softened, multiple Finns swimming through the muted streetlight. “Mmmmm…” I murmured, running my hand against the side of his face, trying to keep from seeing double. “Stay still.” He placed a gentle hand over my hand. “Elizabeth, your keys. It’s freezing out here.” I brought his palm next to my face, brushing my lips against his callused fingers. Need burned through my body, and I fell against his broad chest, covering his mouth with mine with a moan. For a moment, he kissed me back, his hands pressing firm against my shoulders. The falling snow tickled my neck, sending icy trails down my spine, and I pressed into him seeking his warmth. He made a low sound in his throat. “You’re drunk,” he whispered. “I don’t care.” I whispered into his ear. Finn disentangled himself from my arms, and I slipped on a patch of ice, falling on my ass with a giggle. He leaned over me, patting my jeans in search for my keys. His hands strayed to my waist, tickling my side, and I laughed, grabbing his hands. He hovered over me, his hair grazing the firm line of his jaw. “Elizabeth, stop. I mean it. Where are your keys?” He rifled in my coat, and something landed on the balcony with a thud. The book of Yeats’ poetry lay in the snow, white powder quickly accumulating on its worn cover. Finn made to grab it, but I snatched it away, wiping it off and sticking it safe back inside my coat. He stared down at me and swallowed hard, the tinkling crystal of falling snow the only sound in the silent street. “Elizabeth…” He whispered, his hand brushing away a wet lock of hair plastered to my cheek. I shrugged away, rifling in my jeans pocket for my keys and threw them at him. A wave of dizziness washed over me and I curled up on the balcony, willing the snow to blanket over me, desiring nothing but to become the winter so I could sleep for four months and reemerge whole again. Stinging numbness gripped my fingers and toes, and I shivered, burying my head against my arm. “Let’s get you inside.” Finn’s arm slipped beneath my shoulders and under my knees.