UFI welcomes Katee Robert Author of The Sanctify Series. Thanks for Joining us!!

Falling for Your Big Bad

I have a serious problem. It’s almost a sickness, really. When I read a book or watch a movie or play or whatever form of media, I almost always fall a little in love with the villain. The more charming and likely to murder he is, the harder I fall.

Hannibal? God, that character fascinates me as much as he repels me and I can’t get enough of him. Richard III? I’ve been a little in love with him ever since I read his play in ninth grade and that love has only grown over the years. Death in all his various representations? Yep. Stick a fork in me, I’m done.

So it should come as no surprise that I’m more than a little in love with the villain I created in Sanctify. Oberon. He’s smarter than he has a right to be, cold, and possibly more than a little psychotic. He also has a chip in his shoulder the size of Texas.

Sounds bad, right? This is a guy who’s just as likely to gun you down as he is to hold a conversation. But something happened in QUEEN OF WANDS. He got a little more page time, and he started stealing scenes. It was an EFFORT to rein him in and keep him confined to the spot I had planned for him. If Oberon had his way, he’d have taken over the entire book.

Typical Big Bad—why have a slice when you can have the whole cake?

The problem is that I’d love to give him the whole cake. Oberon might be a mean son of a gun, but he’s very much a product of his upbringing. When you’re raised in the company of hateful zealots, is it any wonder that you grow up looking at every problem as one that can be solved with violence? But, for all that, he’s not a paper doll cut-out. He’s got his own wants and desires and he’s not afraid to look outside the box to make them a reality.

Which is a damn problem as an author. Because the more real and complex he becomes, the more I love him. It’s very much like Khan in the newest Star Trek movie. Who can’t sympathize with him, at least a little? He was willing to burn the world for his family. It doesn’t mean we agree with his methods, exactly, but most of us can totally and completely understand where he was coming from. And, as a result, we feel for him.

Katee Robert learned to tell stories at her grandpa's knee. Her favorites then were the rather epic adventures of The Three Bears, but at age twelve she discovered romance novels and never looked back.

Though she dabbled in writing, life got in the way--as it often does--and she spent a few years traveling, living in both Philadelphia and Germany. In between traveling and raising her two wee ones, she had the crazy idea that she'd like to write a book and try to get published.

Her first novel was an epic fantasy that, God willing, will never see the light of day. From there, she dabbled in YA and horror, before finally finding speculative romance. Because, really, who wouldn't want to write entire books about the smoking-hot relationships between two people?

She now spends her time--when not lost in Far Reach worlds--playing imaginary games with her wee ones, writing, ogling men, and planning for the inevitable zombie apocalypse. 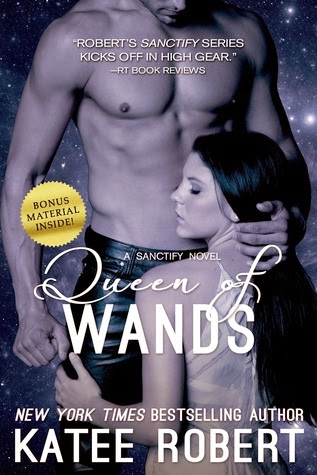 
When Jenny O'Keirna gets a chance to slip her older brother, the new king of Hansarda's, leash, she jumps at it, even if it means playing babysitter to a too-smart-for-his-own-good inventor. She's not expecting the attraction that sparks between them—or that Sanctify is just as desperate to take him for their own.

Never in Mac Flannery's wildest dreams did he imagine Jenny would be the one sent for him. He sees beyond the mad grin the sexy princess of Hansarda presents to the world, and that combination of vulnerability and wicked humor is a siren call he can't resist.

But Sanctify is always three steps ahead of them. On the run—and unable to keep their hands off each other—Jenny and Mac devise an insane plan: kidnap the leader of Sanctify, and stop this war once and for all. Unfortunately, they've just played right into his hands…