Review: Legacy of the Demon by Diana Rowland 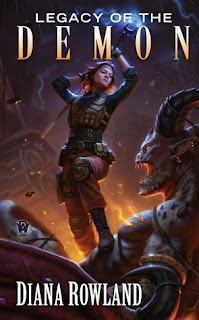 
Sidelined demon summoner Kara Gillian has her hands full when dimensional rifts allow demons to cause widespread panic and destruction on Earth. These aren't the human-tolerant summonables she's known before, but demons from the far reaches of the demon realm.

Add three demonic lords with conflicting ambitions to the mix, and Kara has the perfect recipe for global disaster.


I won't lie, I was completely lost when I started reading LEGACY OF THE DEMON. You find out pretty quick that there was a lot of information missed between book 7, VENGEANCE OF THE DEMON and now. In fact, months have passed, Kara is part of a new team and her new job title is a pretty big deal—the president calls her big—, demons are causing major havoc due to the dimensional rift that happened at the end of VENGEANCE OF THE DEMON, and on top of that, she is dead set on finding Jill's daughter, Ashava, Zack and Ryan.

There was a lot of action in LEGACY OF THE DEMON. So much that it really overpowered the storyline in some spots. I don't think I have ever said that before. We find out a lot more about the Elinor/Rowan story and it was pretty shocking to learn that Rhyzkahl isn't as bad as I thought he was. In fact, a lot of secrets were revealed from front to back of LEGACY OF THE DEMON.

I have no clue how I feel about Kara and Mzatal anymore. They don't have a lot of time together in LEGACY OF THE DEMON and it's hard to feel their connection when they aren't together. Then again, this is an urban fantasy not a paranormal romance. I just like romance.

I really miss the feel of the early Kara Gillian books, I really loved the police work and the investigating. I think LEGACY OF THE DEMON moved a little more in that direction, so maybe it will move even farther there in book 9. One can hope.