UFI welcomes Sharon Lynn Fisher Author of The Ophelia Prophecy. Thanks for Joining us!!

That gets harder and harder as the book tour rolls on, so you are going to get something totally random! I have in recent years developed a bit of an obsession with gingers. My boyfriend and his daughter are gingers, as well as one of my favorite friends, a giant of a soccer-playing chemist from Manchester, England. Possibly it all started when I read OUTLANDER. Or when I went all fangirl over Irish singer/songwriter Glen Hansard (The Frames, Swell Season). Anyhow I love looking at photos of gingers, and have learned all sorts of interesting facts. Such as the fact blue-eyed redheads are the rarest combination — they’re double-recessives. I also recently wrote a piece of sci-fi romance flash fiction that features a redheaded paladin.

Time that I can really call my own is fairly rare. I have a 7-year-old daughter, a relationship, and two jobs (author, and senior editor and partner for a romance/erotica short story site called SilkWords). So with some of my free time I attempt to keep my head on straight with a regular yoga and meditation practice. And my favorite way to totally slack is TV. Some current favorites are Orphan Black, True Detectives, Mad Men, and Downton Abbey.

Probably everyone says this, but those times when I’m really in the zone. That is the true crack of writing. We put up with writer’s block, deadline anxiety, rejection, and all the rest, for those rare and precious moments of bliss when the story is flowing through us without effort. When we’re nothing more than an open channel for creativity.

A close second would be when a reader/reviewer really *gets* one of my books.

I never sit down to write without tea or coffee. I almost always drink decaf these days, so this is more a ritual than a drug habit. I also typically run some background noise, such as rainycafe.com. And when my own company and my freaky orange cat start to drive me batty, I pack up and go to a coffee shop. I’m a serial monogamist with coffee shops. I fall in love with one and go there every time, no matter how inconvenient the location, until I fall in love with another one. My current affair is with a place called Neptune. They have very complicated, highbrow coffee varieties (because Seattle) and the most fragrant jasmine tea ever.

I love Skyler White (AND FALLING, FLY and THE INCREMENTALISTS). Her voice is lush and amazing. I think she and I were separated at birth; we both write speculative stories spiced with romance and geeky goodness, and we both have crazy hair.

I also really like Kat Richardson’s heroine, Harper, (the Greywalker series) and Darynda Jones’s reaper, Charley Davidson. Darynda and I were both paranormal finalists for the Romance Writers of America Golden Heart Award in 2009. She beat me. But she’s adorable, so it’s okay.

How would you pitch The Ophelia Prophecy to someone who has not heard of it before?

It’s a post-apocalyptic, fast-paced Romeo and Juliet story with a vivid setting and plenty of suspense, plus a slow-burn romance with a big payoff.

Can you tell us a little bit about the world that The Ophelia Prophecy is set in?

The setting is post-apocalyptic Earth. The hero’s race — the Manti, genetically engineered beings created by man — have unleashed a virus that all but wiped out humanity. The heroine hails from the last human city, Sanctuary, located in the Utah desert. The hero hails from the Manti capital city of Granada, which is culturally rich and fascinating even in the real world, and really comes alive (literally in some cases) under the Manti’s Gaudi-inspired enhancements.

Do you have a favorite scene in The Ophelia Prophecy?

I think I’d have to say the opening chapter, because it really sets up the dynamics between the hero, Pax, the heroine, Asha, and Pax’s sister and pilot, Iris. We also get a first glimpse into this strange new world, a taste of the sexual and emotional tension to come, and a sense of the mystery that will perplex the main characters for the first half of the book.

Asha was the hardest to write. She has partial amnesia for the first half of the book, and when her memory returns, the way her character has developed in the meantime has to be reconciled with the person she was before the memory loss.

I had the most fun with Pax’s sister Iris, who is part human, part praying mantis, and looks sort of like a futuristic fairy. She’s smart, sarcastic, and unpredictable. And I LOVED writing Banshee, Pax’s ship. She’s a blend of plant and insect DNA and artificial intelligence, and she becomes sentient in the early part of the story.

I have another new book coming out early next year, ECHO 8. Here is an unofficial blurb from my web site:

The fate of two worlds hangs in the balance as three lives entangle: Jake, a man shifted to an alternate Earth, where he must drain energy from others to survive. Tess, the parapsychologist trying to save him. Ross, the FBI agent torn between duty and his love for Tess.

It’s my first love triangle, and I had a blast writing it.

I’ve also started something new that I don’t want to say too much about for now. It’s set in Portland and blends art, mythology, physics, and reincarnation. I’m very excited about it!

I write books for the geeky at heart — sci-fi flavored stories full of adventure and romance. I have a passion for world-building and twisty plots, and themes that recur in my writing include what it means to be human and symbiosis in human relationships.
Find Sharon and her books
Website / Goodreads / Twitter / Facebook
__________________________________ 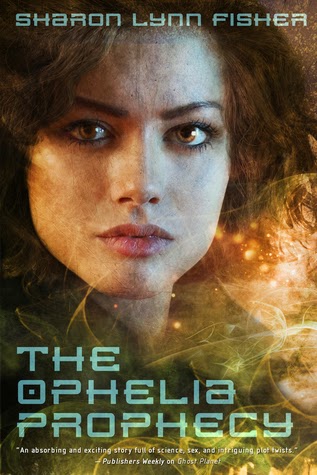 
Our world is no longer our own. We engineered a race of superior fighters -- the Manti, mutant humans with insect-like abilities. Twenty-five years ago they all but destroyed us. In Sanctuary, some of us survive. Eking out our existence. Clinging to the past.

Some of us intend to do more than survive.
* * *
Asha and Pax -- strangers and enemies -- find themselves stranded together on the border of the last human city, neither with a memory of how they got there.

Asha is an archivist working to preserve humanity’s most valuable resource -- information -- viewed as the only means of resurrecting their society.

Pax is Manti, his Scarab ship a menacing presence in the skies over Sanctuary, keeping the last dregs of humanity in check.

Neither of them is really what they seem, and what humanity believes about the Manti is a lie.

With their hearts and fates on a collision course, they must unlock each other's secrets and forge a bond of trust before a rekindled conflict pushes their two races into repeating the mistakes of the past.