Guest Blog + Giveaway: All the Stars Left Behind by Ashley Graham


***
Petrus @silentsoul: pain is the only true constant

Oline @jealousmuch: Stein, shouldn’t you be concentrating on your own black hole of a life?

Stein @urthsucks: ur 1 to talk barbie

Roar @underpressure: .@jealousmuch did you take my shirt?

Roar @underpressure: wait do you have more than 1?

Oline @jealousmuch: I plead the 5th.

Roar @underpressure: I’ll be over later to get my stuff 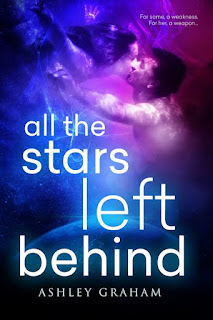 Ashley Graham was born in Ontario, Canada, and has since lived in five countries. Before writing her first manuscript in 2015, she worked as a clerical assistant, quality assurance officer, chef, and stay-at-home mom/homeschool teacher. When she isn’t writing or reading every book she gets her hands on, Ashley enjoys online window shopping, Netflix binges, and spends way too much time thinking about space travel. ALL THE STARS LEFT BEHIND is her debut novel.