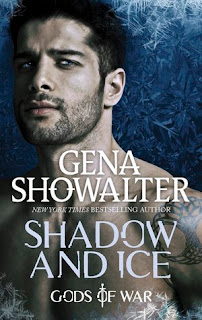 Gena Showalter, the New York Times bestselling author who brought you the Lords of the Underworld, introduces a scorching new paranormal romance series… Gods of War.

Knox of Iviland has spent his life competing in the All Wars, where vicious warriors with supernatural powers fight to the death to claim new realms. One winner takes everything—and all losers die. Enslaved as a child for his ability to control shadows, the most ruthless champion in history will stop at nothing to kill his king. But first he must win the battle for Earth. When a fearsome weapon imprisons every combatant in ice, centuries pass without progress…until she walks in.

Vale London craves a fun arctic getaway with her foster sister before settling down to open a bakery. Street-tough but vulnerable, she is unprepared to find ancient gods escaping a frozen cave—merciless beings who target her when she inadvertently enters their war.

Though Vale is now his enemy, Knox is consumed with lust and a fierce need to protect her. But only one combatant can prove victorious, and he will have to choose: live for freedom, or die for love.


I could not connect with the story in SHADOW AND ICE.

A lot happened in SHADOW AND ICE, but I was both confused and bored for most of the book. The world was confusing, there was a lot of info dumping—which caused more confusion—and I had to force myself to read until the end. I will admit that I did skim quite a few pages.

The world didn't seem to know what it wanted to be. Details were sparse, but when you did find out information, it didn't really make a lot of sense.

I liked both Knox and Vale as individual characters, but I didn't feel the chemistry between the two. It didn't feel believable. I actually really liked Vale's sister Nola and would have liked to have more of her in the story.

Knowing that Nola's story is next kinda makes me want to read it, but I don't know if I could force myself to read it if it was more of what SHADOW OF ICE brought us.