UFI welcomes Author Jamie McFarlane. Thanks for Joining us!!

I have a guilty pleasure. I enjoy reading paranormal romance novels. I'm grateful for the advent of e-book readers where the people around me can't easily know what I'm reading.

When I chose to name my publishing company, I settled on the name Fickle Dragon. To those around me the adjective fickle was of no surprise. I am the epitome of idea-of-the-month and have a wide variety of hobbies. Things I commonly return to are; bike riding, wood working and building little metal creatures by tacking random iron objects together with my welder.

I'm a long form writer, primarily. That is, I prefer writing novels over short stories. There's a moment in the story, about two-thirds of the way through, when I turn the corner. It's the moment when the story turns from building up to working on resolution. I relish that moment and often stop writing for a day or two and reflect on the story to make sure I'm satisfied I've told the story I'm interested in.

Do you have any certain routines you must follow as you write?
Two years ago, I negotiated my day-job's work hours from forty down to thirty-two. I'm grateful that I work for a company that would allow me to do so. As a result, I permanently have Fridays available for writing. This is the start of my writing week and I wake up on Friday morning at 06:30, feed the animals (cats and dogs), make coffee and breakfast and find my way into my office. My goal is always the same, I'll write a chapter (for me about 3,500 words) that day, no matter what. I then endeavor to write at least one more chapter between Saturday and Sunday and hope to get a run at one more chapter during evening hours.

How would you pitch Witchy World to someone who has not heard of it before?
The Witchy World series follows our unlikely hero and modern day wizard, Felix Slade. Felix knows better than to meddle in the lives of witches, but he's drawn into their lives by visions and an unwillingness to stand idly by as dark forces threaten. It is in Wizard in a Witchy World (book 1) where Felix meets the love of his life, Gabriella, a beautiful witch who finds herself threatened by werewolves. In Wicked Folk, (book 2), a young witch is hunted by a demon and Felix discovers he has few answers for such a powerful being.

Can you tell us a little bit about the world that Witchy World is set in?

Witchy World is set in current day, where the general population has no idea of the paranormal or fantastic. As the series progresses, we discover that there are clues all around us as to the existence of the paranormal and the fantastic but people mostly ignore them and even excuse the evidence around them.

Felix, our wizard hero, was orphaned at an early age and raised by a witch and her coven. His separation from them was caused by his emerging powers and the danger he then posed to his foster family. Witch World starts up when Felix moves to a new town and attempts to build his own life, on his own.

Do you have a favorite scene in Wicked Folk (Witchy World Book 2)?
Absolutely. The opening scene where Lace, the beautiful young witch from the book's cover, discovers that her magically inept uncle is summoning a demon in the barn. As you can imagine, the demon escapes and it's nothing but trouble from that point forward.

Maggie, Felix's shape-shifting sister. She's irreverent and loves to call people out when they most need it.

I'm constantly working on new projects and switch between science fiction, fantasy, urban fantasy and mystery. I haven't started work on the next Witchy World installment, but you can be assured it's not far off.

Jamie McFarlane is a graduate of Colorado School of Mines with a Master of Science in Mathematics. An avid reader, tinkerer, woodworker and metal sculptor, Jamie is just as likely to be seen smelting aluminum cans in his garage as he is tacking random, discarded iron objects into a small army of beasties that adorn his home’s landscaping.

Jamie’s writing career began as something of a dare which later turned into a tribute. In his late teens, Jamie was well known as the family story-teller, spinning fanciful yarns about ordinary events, usually with the objective of escaping well-deserved trouble.

One day, his mother, often the target of his mischievous tales, challenged him to commit his words to writing. Jamie promised he would but time passed, as did his beloved mother. In 2014, Jamie made good on his promise and published his first book.

Jamie is the author of a growing library of novels and novellas including the space opera series - Privateer Tales, and the urban fantasy series - Witchy World. Jamie lives in Lincoln, Nebraska with his wife and enjoys spending time with family and friends. 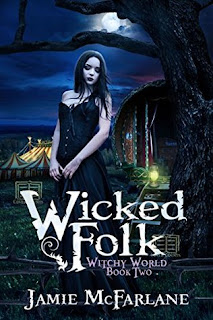 Late one night, a teenaged witch witnesses her uncle perform a forbidden ritual to summon a demon. His carelessness results in the demon breaking free and being released into the world. Drawn to the young witch's powers like a shark, the demon is only temporarily thwarted when she manages to escape.

Felix Slade is a wizard living far from the family he grew up with. Recently he's been unable to sleep as night after night a beautiful young witch is stalked by a demon in his dreams. Each night, new details are exposed and Felix is soon convinced that it’s up to him to prevent the woman’s demise. The dreams reach a critical point when Felix’s own family is threatened by the violence he’s sure is yet to come.

With his sister and the woman he loves by his side, Felix rushes to face the greatest challenge he’s encountered yet. There is great darkness inside him and he must choose to embrace or reject it in order to face the demon’s evil.

Summoned
Faa Farmstead, just outside Eppy Faire, five years ago
Lace Faa stared out at the waning crescent moon through the wavy glass of the old farmhouse window, wishing for even the slightest breeze. The day's heat refused to dissipate from the humid, summer air which clung to her as she tried unsuccessfully to fall asleep. As if on command, a slight puff of wind rustled the sheer curtains of her second floor window, carrying with it the faint sound of chanting. She strained her ears, curiosity piqued, wondering who might be working her family's hidden craft so late at night. Her gaze shifted to the barn across the gravel driveway. A flickering glow between weathered siding exposed the presence of lit candles and a ritual in progress.
She dropped her legs over the side of the bed and placed her feet in just the right spot to keep the weathered floor from creaking. At the age of sixteen, Lace wasn't fully initiated in the subtle magics of her kin, but moving silently had been drilled into her from an early age. She walked carefully, rolling from heel to toe along the unseen joists that supported the floor, avoiding loose boards as she slipped from bedroom to hallway. The hem of her white cotton nightgown thumped quietly, caressing the wooden stair treads as she descended to the kitchen.
For a moment, she paused at the screen door and considered its habit of screeching when opened. Wetting forefinger and thumb in her mouth, she rubbed them on the old, rusted top hinge. Tall and slender, Lace slipped through the door, opening it only a crack. Relief from the heat held in the old house was welcome as she picked her way gingerly across the gravel. Her eyes focused on the flickering light leaking from the ancient barn.
Lace negotiated the piles of junk that had found their final resting place next to the building and carefully placed both hands on the rough siding, leaning forward to look through one of the many cracks in its façade. Her eye came to rest on the edge of a white circle, drawn on the dirt floor only feet from her position. With her limited view, she glimpsed two black candles burning brightly at the tips of what she suspected was a pentagram, although without full view of the circle, she couldn't know for certain.
"Phezore Gesteriph Feoro, I summon you." The bold voice, her uncle Willum Gordon's, resumed chanting in the ancient language Lace believed was only known by her extended family. Her heart thudded in her chest, recognizing the simple ritual - if only from her reading.
"Oh, Willum," she whispered involuntarily before bringing her hand to her mouth.
"Who's there?" Willum asked loudly from within the barn.
Lace stepped back, startled, catching her heel on a piece of long forgotten machinery. She spun, trying to save herself, but in the poor light her knee came in contact with a stack of precariously balanced wooden crates. She lunged from her position, diving away from the collapsing junk, all pretense of stealth abandoned.  The tall door of the barn slid open as she twisted, trying to free her legs.
"Madge?" Willum asked, the low angle of wavering candles illuminating him eerily from behind.
Lace hastily scrawled a rune in the air with her finger, turning away from Willum's position so he wouldn't see the faint sparkling trail as she did. As an initiate of her clan's magic, she'd mastered the one spell that had come easily to her – shadow walk.
Willum stepped from the barn, closing the door behind him. Lace used the noise to her advantage and gained her feet, moving slowly from her original position. Willum turned and stared directly at her, standing stock still – a hunter trying to locate its quarry. Lace froze. She knew him to be cruel when cornered and he would not take kindly to her spying on his ritual. A weak practitioner by family standards, he'd often taken out his frustrations on her. With the provocation of an interrupted ritual, Lace well understood the danger she'd placed herself in.
Willum took a few steps forward, cutting the distance between them in half. Lace breathed slowly, trying to calm her heart, the lack of oxygen demanding deeper breaths. Swiping the air between them, Willum moved toward her. Slowly, she stepped aside, anticipating his movements. Sweat beaded on her forehead as his fingers came within inches of her face.