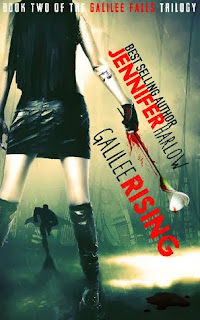 
Love in the time of superheroes...

“Our greatest glory is not in never falling, but in rising every time we fall.” -Confucius

The year since Galilee Falls lost its reigning superhero Justice has not been kind to Joanna Fallon. She's lost her best friend, her boyfriend, her badge, even her mind. The city of Galilee Falls hasn't fared much better with supervillain related crime skyrocketing to cataclysmic proportions. Deliverance for the city arrives in the guise of The Royal Triumvirate--King Tempest, Lady Liberty, and Lord Nightingale--who vow to be the heroes the city needs. Salvation for Joanna appears in the brilliant form of Dr. Jem Ambrose, another lost soul in need of saving. But salvation comes with a high price. When Emperor Cain, an old nemesis of The Triumvirate, decides he will stop at nothing to make sure there is no city left to defend, it is up to Joanna to rise not only for her city, for her new love, but for herself as well…

I was shocked when I started reading GALILEE FALLS, so much has changed since the ending of JUSTICE and the start of book 2 it takes a minute to catch up with time. And don't think that the twists and turns are over with Justices 'death' because they just get more complex. The synopsis above does a pretty good job explaining the book so I wont bore you with my take on events.

Joanna is more determined than ever not to be shoved in a protected corner. When The Royal Triumvirate show up in her cave she lets them know they are stuck with her. I was a little surprised that Joanna was attracted to Jem. I mean he sounds cute but he is super shy and it didn't seem like she went for the shy nerdy type. They are pretty cute together though so it was fun watching him stutter in her presence. If you have read any of Jennifer Harlow's other books you know she does a great job conveying and bringing out emotions to her readers. This series is no different. I found my self tearing up and laughing with the characters. There are plenty of devastating events so have the tissues on hand if you are an emotional reader. I really enjoyed the new characters that GALILEE FALLS introduced and I am excited to see where they all go next.

I was really happy with the events that took place in GALILEE FALLS and the outcome of those events but I can't help but think of the shit that will hit the fan when Joanna finds out that she is still being lied to when it comes to Justice. How much lying can one girl really take? I guess we will find out in book 3 ... Hopefully...