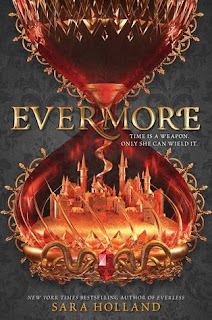 Jules Ember was raised hearing legends of the ancient magic of the wicked Alchemist and the good Sorceress. But she has just learned the truth: not only are the stories true, but she herself is the Alchemist, and Caro—a woman who single-handedly murdered the Queen and Jules’s first love, Roan, in cold blood—is the Sorceress.

The whole kingdom believes that Jules is responsible for the murders, and a hefty bounty has been placed on her head. And Caro is intent on destroying Jules, who stole her heart twelve lifetimes ago. Jules must delve into the stories that she now recognizes are accounts of her own past. For it is only by piecing together the mysteries of her lives that Jules will be able to save the person who has captured her own heart in this one.

One of the things that really drew me into the story in book one was the concept of time being drawn from blood and used as currency. Unfortunately, it isn't that big of a part of the story in EVERMORE.

There seemed to be quite a bit of info dumping happening in EVERMORE and it happened to be major information at times. This made it a bit hard to keep up. The romance was frustrating. Jules acts like she hates Liam, but she's clearly falling in love with him. Some of her comments to him left my jaw hanging though.

EVERMORE did wrap up the Everless series nicely, but the ending felt a bit rushed after all the lead up to the big finale. When all was said and done I had no problem finishing EVERMORE, but it didn't blow me away.