UFI welcomes Author C.A. Worley. Thanks for Joining us!!

I’m a big fan of fantasy and paranormal romance books. I used to think it was because I had an unhealthy obsession with werewolves—or, healthy, depending on how you look at it. Then I read some books where vampires fell in love. Then demons, and so on and so forth. I was devouring these novels like there was no tomorrow. I’ve always been a good reader, but this was becoming an addiction.

Slowly (because I’m slow on the uptake at times), I began to see a running theme through the books that were becoming my drug of choice. These stories were rooted in the idea of fate. I love the idea of fated mates, that there is one person out there in the universe made just for you. It got me thinking about how wolves mate for life. Well, in books they do. Geese mate for life, too, but I doubt anyone’s dying to read about a shifter turning into a goose tearing up your grass. But I digress …

It got me thinking about the supernatural world and what if a wolf found his fated mate, but she was born into a species that did not recognize mates. I’ve also been fascinated by arranged marriages and the horrifying prospect of marrying a stranger. Just how optimistic could one be in that situation?

This is how I came up with the idea of The Wolf King’s Bride. I wanted to write a male character who was alpha, completely smitten, but a little high-handed. As I wrote each chapter, even when Kellan was being a little unreasonable, I couldn’t help but fall in love with him. It was hard for me not to allow Nora, his mate, to jump right into insta-love like I had.

Of everything I’ve written (I also write under the Cass Alexander moniker), this is what I’m most proud of. Not because of super-hot werewolves or witches who can control the elements—though, I do find those things way cool. Not because I didn’t use my typical off-color humor. It’s because I choose to believe we all have a fate. We just have to be brave enough to fight for it.
__________________________________ 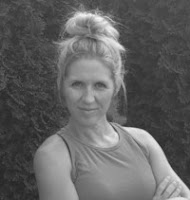 C.A. Worley is the alter-ego of Romance Author Cass Alexander. Where Cass tends to focus on humor in her publications, C.A. loves to write fantasy. She chose to write under the two different monikers to not confuse (or tick off) her readers.

C.A. currently resides in the Midwest, but was born and raised in the South. She spends her days working from home and her evenings are spent shuttling her kids to and fro. Her dinners are subpar, but she makes a mean dessert.

When she's tired of living her sons' travel sports schedules, C.A. enjoys a glass (or four) of wine. She needs the liquid courage to click the publish button for her fantasy romance novels.

Her motto is, "Be Brave," and she tries to live it every day—it takes a healthy dose courage to get through this thing we call life. 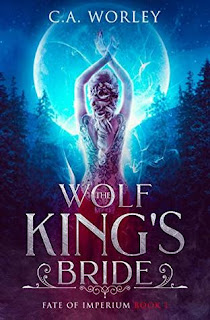 
When Kellan, Wolf King of the North, meets his fated mate, she is only a child. He immediately brokers a betrothal and, on the day after her 20th birthday, whisks her away to his castle in the Northland. Kellan is elated, believing he has everything he has ever wanted. His new wife, Nora, doesn’t quite share the same sentiment.

Before Kellan has time to court her, Nora is attacked. An ancient brotherhood refuses to allow an heir of one kingdom onto the throne of another. All four factions in the land of Imperium appear to be involved in a surreptitious struggle for power … while Nora hides a few secrets of her own.

***The Wolf King's Bride is the first book in the Fate of Imperium Series. Each book is the story of a different king and his fated mate. While the three books do not have to be read in order, it is highly recommended.

Nora ran for the door and Kellan caught her by the waist. “I don’t think so, love.”
She clawed and scratched at him, using her combat training to try and get free. Her father was in danger. He needed help.
Kellan was bemused by his wife’s strength. She managed to score her fingernails across the side of his face. She drew blood and Kellan was half-proud of her.
In his stupor over witnessing her abilities, he must have hesitated, because she landed a hard knee to his kidney. Kellan grunted, but did not let go. He was the strongest wolf in the pack. His little mate was no match for him.
He carried her to the bed and held her down with one hand. He reached for his belt on the floor and his kidney suffered another blow.
Despite his efforts to avoid it, his cock hardened. He made note to revisit this in the future. Battling with her in bed was something he wanted to explore.
A punch to his mouth was enough to dampen his lust. He growled, seizing her wrists and slamming them above her head.
Holding them with his left hand, he looped the belt around them with his right. Nora was bucking like a madwoman, so he flung one leg over to straddle her ribs as he tightened the restraints.
It took longer than it should have. Nora was a skilled fighter. Yet another secret withheld from him.
“There,” he proclaimed once she was secured to the bed. Her feet were still loose, but he didn’t think she could get her arms free.
“Please, don’t do this, Kellan. My father … please!”
“Nora, calm yourself. I will find him. Did you think I would ignore the vision? I may be furious with him, but I’ll not ignore my father-in-law’s need for help. Trust me to do what is necessary.”
“But I can track him. The earth, it will tell me where he is.”
“As will my nose. Do not worry. I will handle it.”
“Don’t you dare leave me like this, Kellan.”
He ignored Nora as he started to dress, then thought better of it. He would leave the castle in wolf form, so he could track Edward.
“I will return as soon as I can.”
Kellan bent to kiss Nora. Instead of allowing it, she tried to hit his forehead with her own.
“Woman, will you calm down?” Kellan did not want to get his nose broken.
“How could you? Are you trying to ensure you’ve earned my abhorrence? Because I can assure you it’s working,” she seethed.
Kellan recoiled at the vehemence in her words. “No. Do not say that.”
“How could I not? You do not listen to me. You have no regard for me. You think of me as a witch. Do not pretend that you’re not disappointed I’m not a she-wolf. I bet if I was wolf you would let me go to my father. Instead, you’ve tied me to your bed like a damned animal.”
“You are tied to our bed, so I can ensure your safety, Nora. I will be gone from the castle and you refuse to stay put. I cannot concentrate on whatever your father is facing if I am worried about you. You are my mate. Nothing is more important to me than you. Do you hear me? Nothing. I care not that you are an elemental. I shouldn’t have called you a witch. I am sorrier than you could possibly know. My anger got the best of me. It won’t happen again. Just as you will not lie to me again. Mates do not lie to one another. Ever. I am hurt that you could do it so easily. But we’ll discuss it later. I have to go.”
Kellan had his hand on the door handle when Nora landed her final blow.
“I may be your mate, but you are not mine. I am Gwydion. We don’t have mates.”
He bowed his head as his heart filled with more sorrow than he had ever known. He took a calming breath, wanting to ward off the reaction he was having to Nora’s harsh words, but the grief inside him was too big to hide.
Kellan turned his head towards his wife, eyes wet from the enormity of his heartache.
Nora was shocked to see tears forming in Kellan’s eyes. One spilled and mixed with the blood from the scratches on his face. The ones Nora had put there only a moment before.
“I may not have your heart, Nora. But you have mine. You can wound it easily. Yet, I give it to you, freely, with no expectation of anything in return. I’ll endure your hatred to ensure your safety. For this, I’ll not apologize.”
With that, Kellan exited the bed chamber, leaving behind the only thing he had ever truly held onto—hope that his mate loved him.