UFI welcomes Cherie Priest Author of The Cheshire Red Reports series. Thanks for Joining us!! 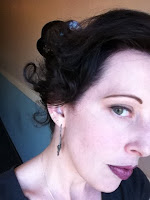 I’m very pro-Batman; I love vintage clothes and accessories; I love dark/vivid purples, greens, and oranges – but mostly wear black; I really miss the vanilla-mint toothpaste Crest used to make; I’m a sucker for lavender, jasmine, and lilac scents; I have comically flat feet and mostly wear flat shoes with special inserts, these days, which makes me feel old (but comfortable).

Down time? I’m writing one book, putting out a total of four books this year, and working a full time day-job. If I have an hour of downtime, I’m likely to drink or sleep. That’s pretty much it, right now.

Not really any routines, but I do have to structure my day pretty closely when I’m writing and day-jobbing. Mornings go to day-job; break for lunch and work-out; afternoons belong to my books.

Honestly, I don’t read much fiction these days. Most of my reading time goes to nonfiction/research for my steampunk novels – which yes, are fiction, but they’re set in the 19th century and I like my verisimilitude.


How would you pitch your Cheshire Red Reports series to someone who has not heard of it before?

I’ve been calling it my fabulous urban fantasy adventure about a neurotic vampire/thief and her wealthy blind client, with Bonus! Cuban drag queen and military intrigue.

Can you tell us a little bit about the world that your Cheshire Red Reports series is set in?

It’s set here and now, and based in Seattle, Washington – where I live at present. And there are vampires.

Do you have a favorite scene in Hellbent?

Hmm. My favorite scene to write was probably the opener – with Horace in the bar. It’s basically a chapter-long penis joke. My parents are, um, very proud….

Favorite: Probably Adrian. He’s a scene-stealer, which is a real trick when you’re sharing scenes with Raylene. Hardest: Domino, because he’s on the cusp of so much change and growth.

Definitely one more Raylene book, and another steampunk book this year (plus yet another next year). Beyond that, the Magic 8 ball says, “Ask again later.”
__________________________________
Find Cherie and her books
Website / Twitter / Facebook / Blog
__________________________________
Author Bio:
I was born in Tampa, Florida, down the street from the stadium in 1975 — the same year that gave us Saturday Night Live and The Rocky Horror Picture Show, so I consider myself in good company. I have a B.A. in English from Southern Adventist University, here noted because it embarrasses them to share a paragraph with Tim Curry in drag; and I have an M.A. in Rhetoric (composition/critical theory) from the University of Tennessee, which couldn’t care less.

I write novels. To date, I’ve had ten of them published, and another four are in the queue. My most recent book is Bloodshot. My best-known books are probably Dreadnought and Boneshaker (2009) – which was nominated for a Nebula Award and a Hugo Award. Boneshaker also won the PNBA Award, as well as the Locus Award for Best Science Fiction Novel, so yes, my resume is starting to look a little lop-sided. (Not that I’m complaining.)

In the spring of 2011 I began working for a video game company, but my project there hasn’t been announced yet – so I don’t get to blab about it. (Alas!) Minus that one super-secret thing, you can find a mostly proper bibliography over here. 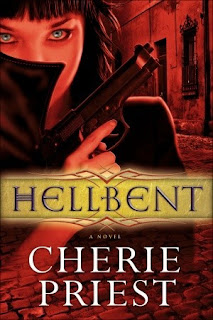 
BAD TO THE BONE

Vampire thief Raylene Pendle doesn’t need more complications in her life. Her Seattle home is already overrun by a band of misfits, including Ian Stott, a blind vampire, and Adrian deJesus, an ex-Navy SEAL/drag queen. But Raylene still can’t resist an old pal’s request: seek out and steal a bizarre set of artifacts. Also on the hunt is a brilliant but certifiably crazy sorceress determined to stomp anyone who gets in her way. But Raylene’s biggest problem is that the death of Ian’s vaunted patriarch appears to have made him the next target of some blood-sucking sociopaths.  Now Raylene must snatch up the potent relics, solve a murder, and keep Ian safe—all while fending off a psychotic sorceress. But at least she won’t be alone. A girl could do a lot worse for a partner than an ass-kicking drag queen—right? 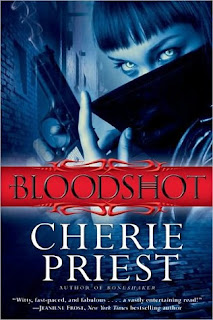 Raylene Pendle (AKA Cheshire Red), a vampire and world-renowned thief, doesn’t usually hang with her own kind. She’s too busy stealing priceless art and rare jewels. But when the infuriatingly charming Ian Stott asks for help, Raylene finds him impossible to resist—even though Ian doesn’t want precious artifacts. He wants her to retrieve missing government files—documents that deal with the secret biological experiments that left Ian blind. What Raylene doesn’t bargain for is a case that takes her from the wilds of Minneapolis to the mean streets of Atlanta. And with a psychotic, power-hungry scientist on her trail, a kick-ass drag queen on her side, and Men in Black popping up at the most inconvenient moments, the case proves to be one hell of a ride.