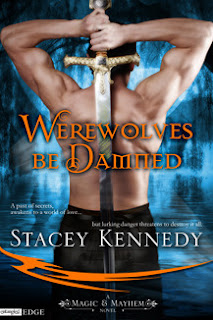 Nexi Jones—part witch, part guardian, and wannabe kick-ass warrior—can’t throw a punch or conjure the simplest magic. But that doesn’t stop her from hunting the werewolves who slaughtered her human family. She’ll have her revenge, but only if Kyden, the elite guardian, would get the hell out of her way.

Kyden can’t decide if Nexi wants to get herself killed or if she just has no clue what she’s doing. But her father made it clear: keep Nexi safe…or else. Of course, the more Nexi runs toward revenge, the more she needs Kyden’s aid, and as she grows into her power and confidence, so does his desire to protect her. The only problem? She’d rather he dropped dead.

But when a vampire paints a bull’s-eye on Nexi’s back, she’s hard-pressed to deny Kyden and the help he’s offering. Even if it means getting her revenge will be a little bit harder. At least it will still be as sweet.

This story was previously published elsewhere under the title The Willow in 2010, and has been revised and expanded for Entangled Publishing.


When Nexi and her parents are attacked by some wolves in their home some mysterious strangers come to save her. She quickly finds out that not only were her parents not her real parents but she isn't even human.

Nexi starts off kinda unlikable (at least to me). She is reckless, angry and an all around pain in the butt. It is understandable but I have no patience for stupid and she pulls some stupid moves in the search for revenge. Once she is allowed to join the investigation and trains to be a guardian things quickly change and I end up liking her a lot more. Kyden was fantastic. He is patient yet distant yet protective yet... he has many roles in WEREWOLVES BE DAMNED. I enjoyed Nexi and Kyden's connection to each other as well as the progression of their relationship. The plot moves nicely and there is plenty of action, especially at the end of the book. The introduction of characters is done at a nice pace. I enjoyed both the fun and sad parts of the book and I look forward to the next step in Nexi and Kyden's journey.

So far every book that I have read from author Stacey Kennedy has been a slam dunk. I am definitely going to start taking a look at her back list. I do have one complaint. This is actually an earlier series that was written by Kennedy and is being revised and expanded. I really really want to read the next one now.=)