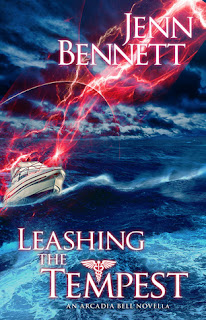 Dating a demon, defeating evil, running a tiki bar: Arcadia Bell is a great occult mage in many respects. But then there’s the challenge of her boyfriend’s precocious teenage son…

Arcadia "Cady" Bell may have saved the Hellfire Club’s children from a local bogeyman, but she and her Earthbound demon boyfriend, Lon Butler, now face a more disturbing problem: his teenage son’s new demonic abilities. Jupe Butler can persuade you to do anything—or so he thinks. To test the limits of his newfound power, Cady invites the co-owner of Tambuku Tiki Lounge to be the teen’s guinea pig during an afternoon boat cruise. But when an angry storm whips the Pacific into a frenzy and Jupe puts them all in serious danger, will Cady's magick trump a teenager’s excess confidence?


A nice relaxing day cruise turns dangerous quickly when Jupe decides to get angry with the captain and his little power trip up leads them in deep water rather quickly. Together Cady, Lon, Jupe and Kar Yee get themselves out of trouble and back to dry land.  Jupe continues to make me laugh, he is a great character that I couldn't imagine not being in the series. We get little glimpses of Kar Yee in the full stories but it was great seeing her be part of the action and solution in LEASHING THE TEMPEST. The problem that the characters face was pretty neat to witness and crazy to think about.

LEASHING THE TEMPEST ended up being a neat little adventure with our favorite Arcadia Bell series characters. Its short, sweet and to the point. It will definitely hold you over until book 3 BINDING THE SHADOWS releases in May 2013.