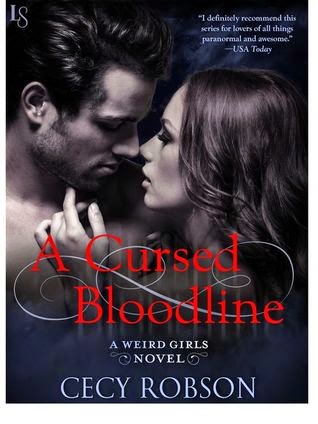 
Just when Celia thinks the supernatural world can’t turn deadlier, a new rival emerges, proving just how dangerous a power-hungry were can be.

Since being cursed with unique abilities, Celia Wird and her three sisters have fought the most bloodthirsty preternaturals in the Lake Tahoe region. But Celia’s greatest threat is someone she would have never suspected: Anara, a werewolf Elder who has allowed his hatred for Celia to spiral out of control. In a play for dominance, Anara tortures Celia and gives her an ultimatum: sever her mate bond with pureblood were Aric — or Anara will kill everyone she loves.

From the instant they met, Celia and Aric have shared an attraction that cannot be tamed. So keeping Aric away is impossible, and Aric would sooner die than allow anyone to hurt the woman he loves. Misha, master vampire and Celia’s sworn protector, also finds his way into the chaos, seeking blood from those who have harmed her.

Now Celia and her sisters are caught in the middle of a war driven by lust, fueled by hatred, and destined to end in tragedy. For Anara is a force to be reckoned with, and he will not succumb without robbing Celia of those who hold her heart.


A CURSED BLOODLINE was a depressing, torturous, and heart wrenching addition to the Weird Girls series.  Come to think of it. The last few books have been like that as well, but book 4 is a little more of all of those. Celia and Aric are finally back together in book 3 and then the battle at the end of CURSED BY DESTINY happens and things once again change. On top of that. A familiar enemy shows up in the beginning of A CURSED BLOODLINE and puts another obstacle in Celia and Aric's path to happiness.

I REALLLY wanted something to go right for Celia in book 4, but every time that happens something rips it apart. It DOES get tiring and it DOES make me want to throw my book against the nearest wall, but I still couldn't put the darn book down. I don't think it's too much to ask that ONE of these books doesn't feature Celia being torn to pieces in some way. Hopefully we will get that at some point sooner rather than later.

The secondary characters of this series play a big part in every book and it is great to see connections grow and strain with each installment. The pace of A CURSED BLOODLINE flows nicely and the plot is anything but boring. I am absolutely heartbroken for Celia after reading A CURSED BLOODLINE, but I'm also hopeful for her too. I have a lot of mixed feelings and until I read book 5 I'm not sure if that will change. Even if I wanted to stop reading the Weird Girls series, which I don't, I would have a very hard time not picking up and reading more after the events of A CURSED BLOODLINE.