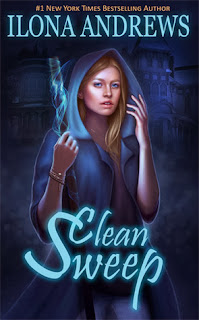 
On the outside, Dina Demille is the epitome of normal. She runs a quaint Victorian Bed and Breakfast in a small Texas town, owns a Shih Tzu named Beast, and is a perfect neighbor, whose biggest problem should be what to serve her guests for breakfast. But Dina is...different: Her broom is a deadly weapon; her Inn is magic and thinks for itself. Meant to be a lodging for otherworldly visitors, the only permanent guest is a retired Galactic aristocrat who can’t leave the grounds because she’s responsible for the deaths of millions and someone might shoot her on sight. Under the circumstances, "normal" is a bit of a stretch for Dina.

And now, something with wicked claws and deepwater teeth has begun to hunt at night....Feeling responsible for her neighbors, Dina decides to get involved. Before long, she has to juggle dealing with the annoyingly attractive, ex-military, new neighbor, Sean Evans—an alpha-strain werewolf—and the equally arresting cosmic vampire soldier, Arland, while trying to keep her inn and its guests safe. But the enemy she’s facing is unlike anything she’s ever encountered before. It’s smart, vicious, and lethal, and putting herself between this creature and her neighbors might just cost her everything.

I've wanted to read CLEAN SWEEP since it was introduced as a free serial on Ilona Andrew's Website, but didn't want to sit at my computer screen to read it. When I saw the authors were offering up review copies to bloggers I jumped at the chance to read it from the comfort of my e-reader.

CLEAN SWEEP introduces a fun and well-built new world with a great cast of characters. The paranormal elements were fresh and interesting with a nice balance of the real world thrown in. I had no issue picturing the characters, especially Dina. She ends up being nothing like the typical innkeeper because she gets involved where others would not. We dive right into a bit of her past and why she's an innkeeper. I look forward to learning more in future books. There is a bit of a love triangle involved. Sean is an ex-military werewolf that knows nothing about the history of his people and happens to be Dina's neighbor. Then there is Arland the vampire soldier that's introduced during the conflict of the story. He ends up as a resident of the Inn for the duration. The two men clash at every turn and fight for Dina's affection when they can. The romance is very light but it's nicely played out with plenty of drama and frustration.

I wasn't crazy about the ending but it didn't take away much from the story. It would have just been nice to have a happy type ending after all the drama that the love triangle caused. I guess I will just have to read book 2 when it's available to find out what happens next. Any fan of the writing duo known as Ilona Andrews will fall right into The Innkeeper series and hang on for the ride.